The people behind ProZ.com: Pedro Diaz 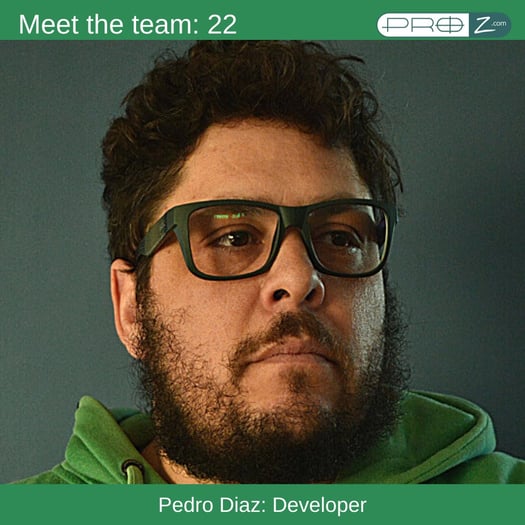 Over at the Translators and Interpreters (ProZ.com) Facebook Group, there are a series of weekly posts introducing you to the people behind ProZ.com. Some of them you may have come across, while others have remained in the shadows… until now! In the weeks and months ahead, we’ll get to know all of them in turn. This is our 22nd profile.
On the walls of Pedro Diaz’s office are maps of the five cities he’s lived in. Born in Artigas in Uruguay, on the Brazilian border, he moved with his family to Salto, in the West of the country, this time on the Argentinian border. Aged 18, he left for the capital Montevideo, to study for a degree in communications, followed by five years working at the Bank of Santander. When a six-year relationship broke up, he decided he needed to leave the city and headed for Rio de Janeiro in Brazil.

Not a bad choice, it turned out. Although he was still programming, he worked at a hostel in Copacabana, just two blocks from the famous beach. It was quite a culture shift from the corporate atmosphere at the bank, to wearing shorts and heading to the beach for lunch.

And as far as the language was concerned: not a problem! All the cartoons Pedro saw until he was 6 were in Portuguese – because that was the strongest TV signal in his region. So he absorbed a great deal and found it easy to get by as soon as he arrived.
But over time romance popped up again, and in Rio he met the woman who became his wife. It turned out she was from La Plata, and that’s how he ended up in ProZville – ten years ago now.

His first job in Argentina was at the Ministry of Production, creating a system for electronic records. But he was hired as a contractor, not full-time, and wasn’t fully satisfied with the situation. In his search for new work, Pedro chanced upon an advert recruiting developers at ProZ.com and…well you know how the story ends.

His daily routine now is focused on solving issues and bugs from specific sections of the site, which are assigned to him by the team. Apart from the obvious technical challenges, what he enjoys most is the chance to use English and be part of an international culture – his course back in Montevideo had included three years of linguistics, so language has always been a key interest.

In his free time, Pedro has a fascinating hobby – connecting various things to the Internet, in the spirit of the Internet of Things. With his three year-old son he’s already made a smart robot, which the boy's grandparents can move around even from their home in Uruguay. He’s branched into sensors for temperature, light and humidity. The minute he came across the idea he saw the magic in it – especially its application to the real world.