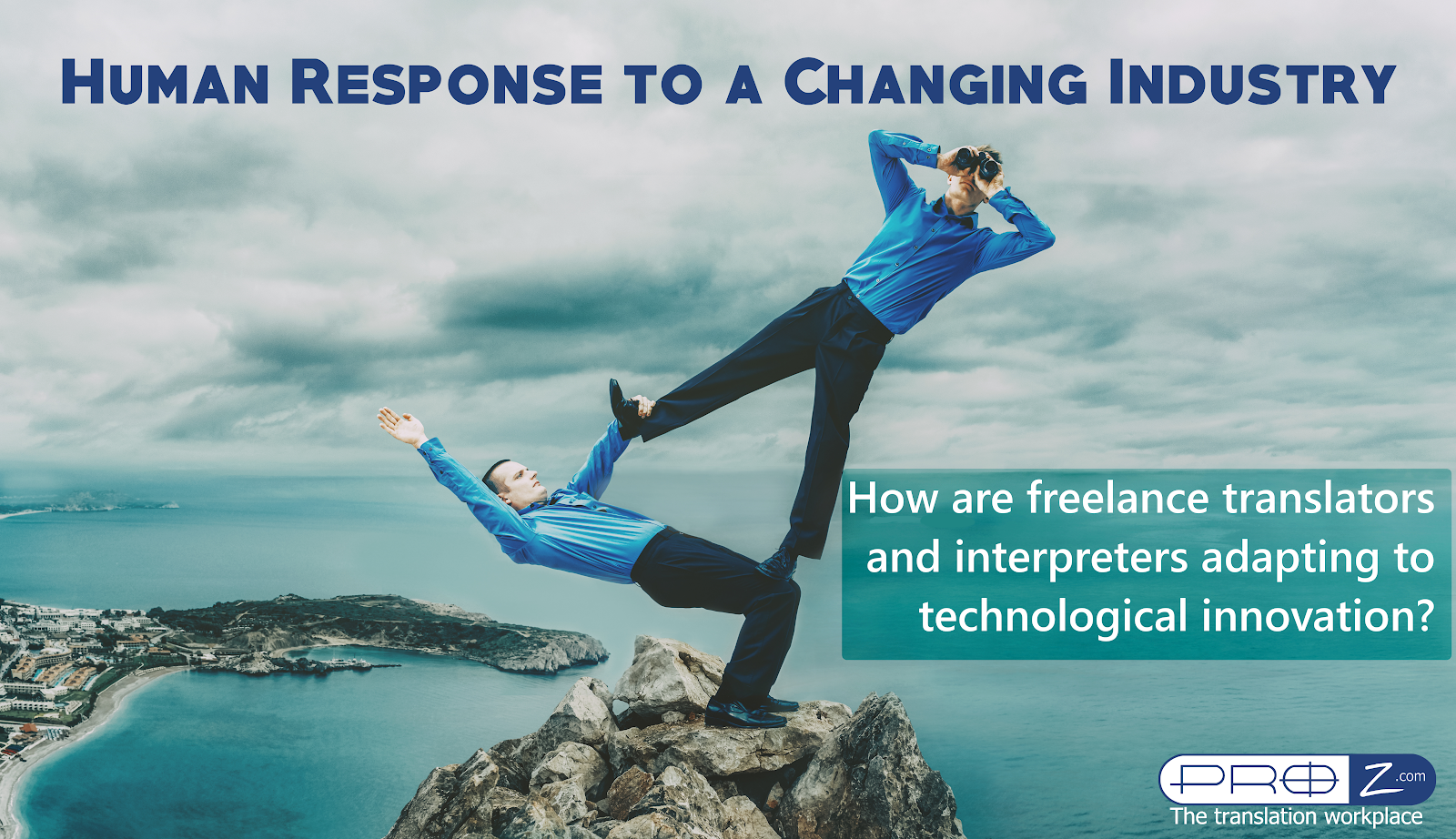 In this report, we will take a look at some of the changes that have been introduced into the language services industry over the past years, and at how the humans in that industry, specifically translators and interpreters, are reacting and adapting to those changes.

But first, we want you to meet someone.

On ProZ.com, regular translation contests are held. They are an opportunity for translators to have fun, to practice their skills with a bit of competition involved, and with the possibility to differentiate themselves. These contests are peer based; entries are evaluated, rated, and voted on by the community of translators working in each language pair.

In 2009, as an experiment to see how machine translation would stack up against human translation at that moment and then over time, "GoTrans" was born. 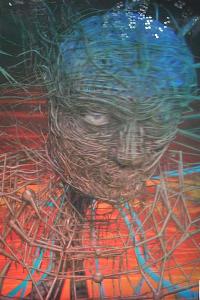 Or rather, he was generated. GoTrans is a representation of pure machine translation. He submits anonymous entries in every translation contest, in every pair he can, with raw machine translations of the source texts. He really wants to win, someday. In the beginning, he used output from Google Translate, but nowadays he also incorporates DeepL for languages in which it is available.

For many contests over the years, poor GoTrans' entries were immediately detected as machine translation. Dislikes would rain down on his selection of terms. The entries would be rated so poorly that they were the first to be ruled out of competition. In some cases, there was a bit of scandal as professional human translators reported that someone was submitting entries that were obviously unedited machine translation. 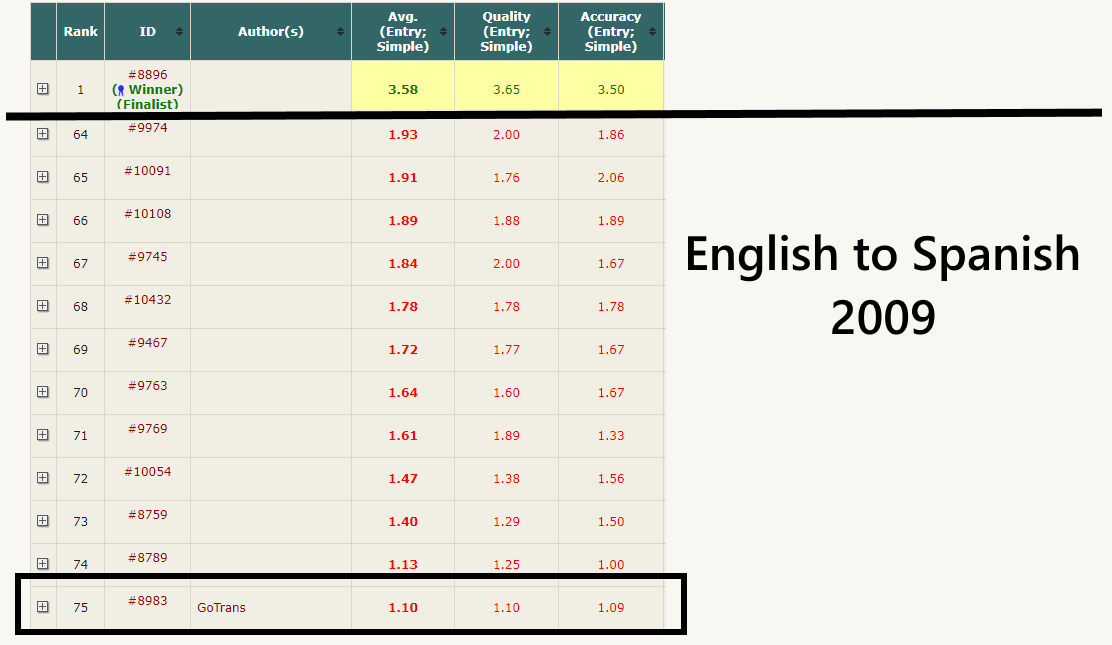 But GoTrans is persistent, is always learning, he knew he was getting better, and so he just kept participating. Ten years went by.

In English to Spanish, for example, in an early stage of the contest, GoTrans' entry was 12th out of 21 entries.

In English to German, at least one human liked the way he translated one phrase. Perhaps sarcastically, but still, this was a first for GoTrans.

In English to Portuguese, GoTrans received two votes for first place and one vote for second place. 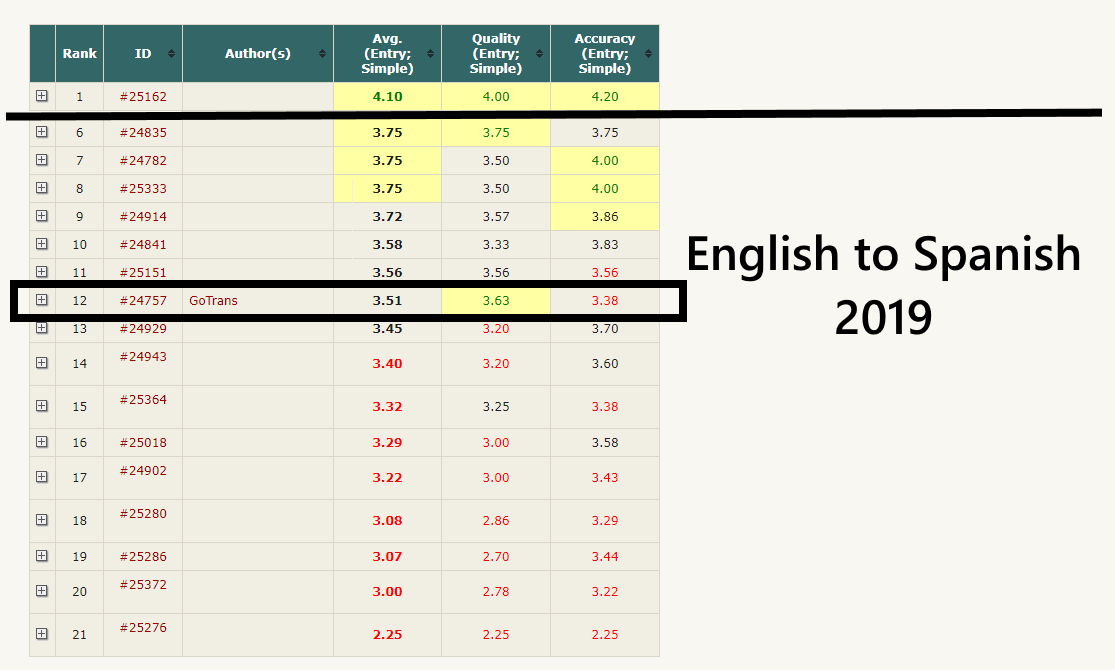 Now, there are obviously all kinds of clarification and context that need to go along with this. GoTrans’ entries are not good enough to win on their own. In some cases, though, there is a marked improvement. This is not happening consistently across the board. GoTrans took a beating in the English to Korean pair in the contest, for example. As mentioned, positive votes and likes on his translations may be attributed to a certain sarcasm of translators encountering his entries-- it is difficult to know, with these humans! However, the nature of the ratings (for Quality and Accuracy) given to some of GoTrans’ entries indicates that he is getting closer to passing as human, or nearly human, among human translators. Which would make GoTrans happy, if he were capable of experiencing such a meaningless emotion...

Regardless of all the caveats, we think GoTrans’ story is noteworthy. But what are the ramifications of this, and other changes, that have been introduced in the industry? Let’s take a brief look at these changes and some theoretical outcomes, and then we’ll get down to the real-world data from linguists.

Distances have evaporated. If you provide a product or service, you can now “be there” with your customers or clients. But so can every other provider! Competition for the attention of customers has increased and will continue to get tougher. Your message to them needs to be more compelling, to “speak to the heart” more now than ever. And knowing your customer, their circumstances, and the role that text you are about to translate plays for them, is growing in importance.

Machine translation, Translation Management Systems, and Artificial Intelligence are being used for automation of many types. It is now possible to access translation that is free, instantly available, and -- increasingly -- not bad. “Lights out” project management is changing the way project management will look in the future, and the role of the human project manager will change as a result.

It is true that no one yet trusts machine translation and artificial intelligence to check themselves, but already you have instances where AI is handling some kinds of content creation; taking the stats of last night’s sports match and generating a write-up of the game. Machine translation can then take that write-up to other languages in a more or less acceptable form. It is also used as an instant way of localizing hundreds or thousands of product descriptions, which can then be updated by a human, or not, depending on the results and audience reaction. The machine translation - artificial intelligence combo not only gets things done faster, in some cases it can serve as inspiration for the humans who come along to perfect the end result.

These technologies will be adopted and used by some to their advantage; some will even train their own. Some will successfully shift to areas where these technologies are not relevant, or at least where they are less relevant for now. Others will be made obsolete. But of course change brings opportunity, and now is the time when we should see creative, new outcomes as a result of people combining and leveraging these technologies.

Advances in tech have created opportunities for increased intimacy on various levels. We now have direct, immediate access to not just our customers, but to each other.

Supply chain consolidation is bringing certain parties into closer contact. A recent article on Slator explores why many clients are leaning towards direct contact with freelancers and knowing who is translating their content, in the interest of quality. Remote interpreting can bring an interpreter to your aid in minutes, mouth to ear or face to face. As this happens, freelancers are being called on to understand the businesses and markets they are serving more intimately.

As this intimacy increases, freelancers who can cultivate soft skills and business savvy are the ones who will come out ahead. For many freelancers, work with direct clients can prove both (mutually) satisfying and economically attractive, but there is pressure to bring more to the table in these relationships than in the past.

The world has gotten smaller, sure. But a lot of the things in it have also gotten bigger. End clients are getting bigger, some of them massive. So are LSPs and freelancer databases. The amount of source material has been expanding much faster that it can be localized in many cases, and the source material “unit” is larger and larger. More languages, more customization, and more project prep can be justified on these scales.

The quality spectrum has also gotten broader. Where in the past a translation was a translation, and one strove for the highest quality possible, the translations needed by clients now can range from “good enough” to prestige.

This increase in scale is favorable to the trend of specialization. LSPs can be more targeted in their requirements, and freelancers can specialize more narrowly than before. One can even specialize based on how they want to position themselves on the quality spectrum; it is possible to market oneself based on productivity, or on one’s touch.

All of that theoretically, at least. Let’s look at what is actually happening with freelance translators and interpreters.

Part 2 of this report can be found at https://go.proz.com/blog/human-response-to-a-changing-industry-part-2

In parts 2, 3 and 4 of this report we will look at the human response: how translators and interpreters are adapting, and what the outlook for the future is.

This report was originally published in its entirety as a ProZ.com state of the industry report. ProZ.com members can see this and previous reports at https://www.proz.com/industry-report/