Part three of this report was posted at https://go.proz.com/blog/human-response-to-a-changing-industry:-part-3

A through line in talking with freelance translators and interpreters about technological advances in the industry was a perceived “de-personalization” of certain aspects of their work. For example, nowadays you can have the following scenario: A translator gets an automatic notification that a job is available. They log in to a platform-- where no one is home, or needs to be-- accept the job, do the job, turn it in, get paid, and go about their business. This is an excellent solution for those of us who seek efficiency and prefer to avoid human contact! But for many freelance translators, this kind of de-personalization is a concern, especially in the context of a field where one has traditionally been somewhat isolated and on their own to begin with.

But there is another side to this de-personalization. Let’s look at three brief anecdotes from the world of remote interpreting:

Now, these are all cases of less than professional behavior, and they are the exception to the norm, but they happened, and they are interesting illustrations of how technological advances are also forcing a sort of personalization and intimacy. Suddenly one is dressing up for work at home, and taking extra care over what appears in the background. LSPs have noticed that in some cases, automatic messaging can be off-putting, for vendors and clients alike. It needs some help from the humans, and sometimes personal, one-on-one contact is still the most efficient method of getting something done. Automation allows us to work more efficiently, but if we do not personalize it appropriately, if we are not using it correctly, it gets noticed, and is not always appreciated. 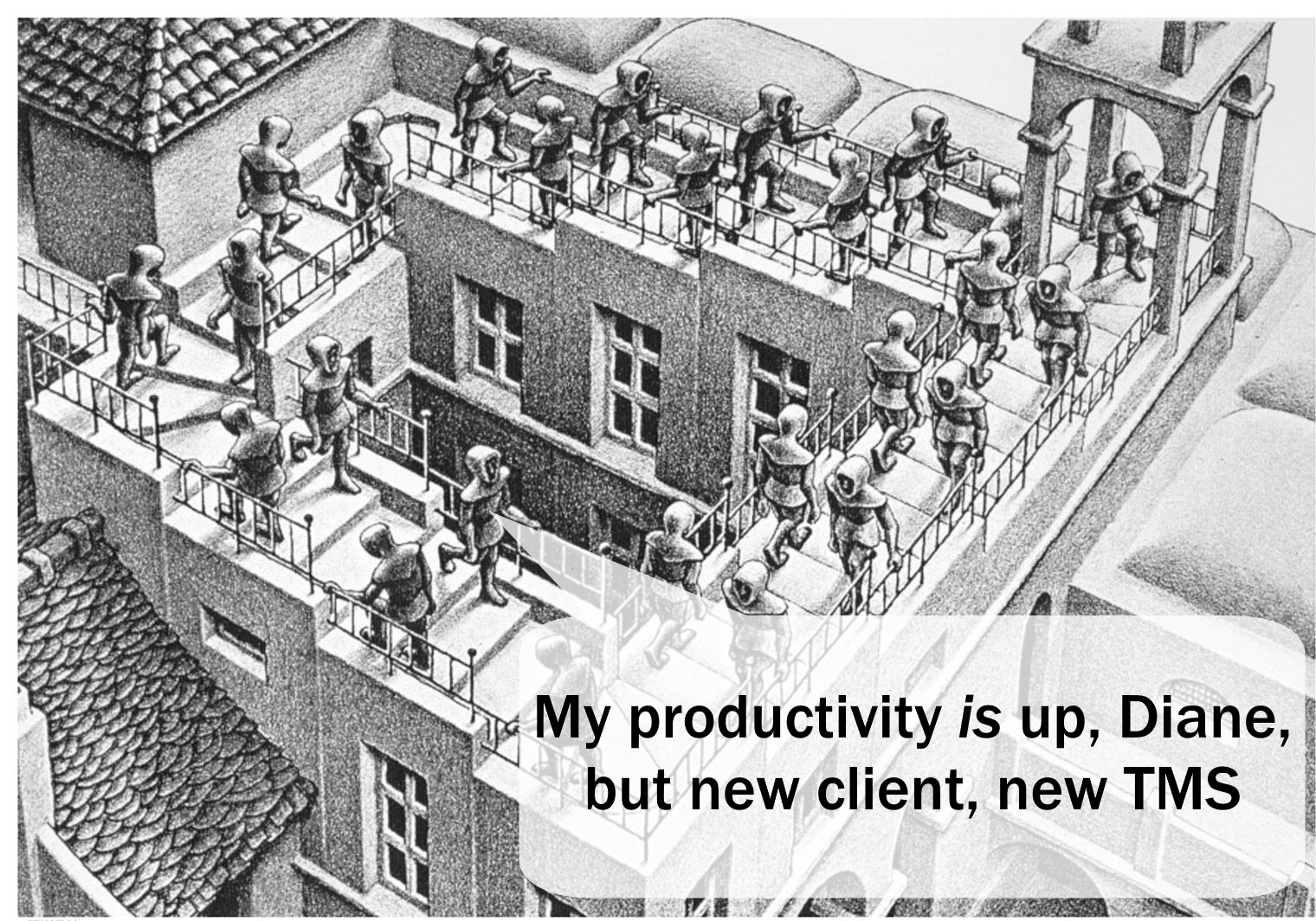 Finally, as everyone standardizes and automates processes for productivity, translators may be struggling more for efficiency than the rest of us, across clients. On average, a translator uses three different CAT tools. At least 61% operate within two or more different translation management systems, where further translation tools, workflow communication systems, processes of invoicing and payment, and so on, may be found. So the average freelance translator is expected to be proficient in multiple tools and processes in order to help ensure results and efficiency on the client end. Perhaps this is the curse of the freelancer in general, but the additional agility required of a freelance translator is something to keep in mind. The more uniform and interconnected the tools and processes are across the board, the greater the efficiency and results one might expect from those providing these services.

While a relatively significant segment of the industry is seeking greener pastures, it is not all gloomy, of course. 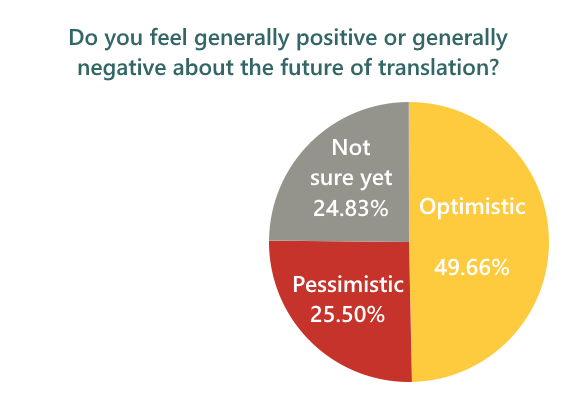 When asked about their outlook on the future of the profession, a percentage nearly proportional to those who are diversifying out are pessimistic. Nearly half have a positive outlook. Almost 25% are reserving judgement. It is probably up to us all to help ensure that we keep these professionals. As in any company or industry, turnover is where you shed under-performers. But sometimes you lose the best ones, too.

If you ask a translator or interpreter what they expect in the immediate future, at least half of them will tell you they are projecting an increase in work-- and in their income (46% are planning on adjusting their rates)-- for 2019. Only 11% have not made any monetary investments in their work over the past year. Just over 68% would recommend freelance language work to someone considering career options.

So, what does tomorrow's translator or interpreter look like?

In preparing this report, talking about technology and humans, we resisted the urge to draw on The Terminator. Was tomorrow's freelance language professional a poorly-equipped human struggling to survive, scrambling to beat the machines against the worst of odds? Or, was the future translator actually Arnold Schwarzenegger, with half a robot face exposed, one red laser eye post-editing machine translation non-stop out into the darkness?

We resisted that temptation, though.

John Varley wrote some novels (the Gaea trilogy) which explore what happens to a group of humans when they come into contact with a gigantic alien being, the size of a moon, that happens to be orbiting around Saturn. This alien being has been monitoring us and is obsessed with our movies. It has created a whole world inside of itself, based on a mixture of its understanding of Hollywood films and the limitations of real physics. This group of humans find themselves living inside this place which is somewhat familiar, but also alien, changeable, and at times hostile in the extreme. One or two disappear early on-- were they unable to adapt? The remaining humans are eventually somewhat absorbed by the different cultures that exist in that world and are evolved into versions of the indigenous creatures living inside it. One becomes a sort of centaur. Another becomes a symbiont inside a floating, gas-filled blimp creature. Another, after many tribulations and adventures, becomes a flying, angel-like being.

You decide who is what in that analogy! Oh, and did we mention the giant alien being who created the world they were living in was going senile?

Translators and interpreters have been, and are going to be, a bit like those humans in that story. They are not all evolving to adapt to the same landscape, even though they're in the same place. Some are adapting to be faster over land, others to gracefully swoop through the air. Some are learning to do both. Some are struggling to stay what they are, while others are embracing the change more fully. Either way, they are coming out of the experience with more legs, or more wings, than they had before. With new superpowers of sorts. 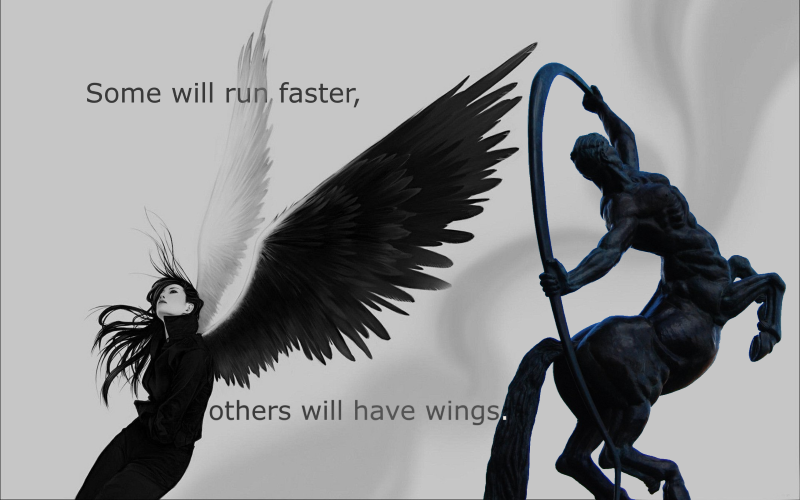 In the first part of 2019, thousands of freelance translators and interpreters contributed in surveys, polls, online group discussions, and one-on-one conversations that led to the information presented in this report. A special thank you goes out to the folks at GALA, who included a version of this report as a talk in the 2019 GALA conference in Munich. In addition, we would like to thank the following individuals and organizations who were instrumental in providing input and insight on the topics presented here:

This report was originally published in its entirety as a ProZ.com state of the industry report. ProZ.com members can see this and previous reports at https://www.proz.com/industry-report/