Interview: “The Sounds of Silence” contest and the first entry ever in sign language 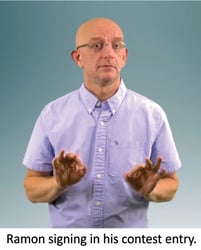 Ramon Woolfe is a British Sign Language (BSL) and International Sign (IS) translator, presenter, director, mentor, founder and CEO of Drip Media and campaigner for awareness for BSL and the deaf community, and the first user in the history of ProZ.com translation contests to make an entry in sign language.

In this interview, he tells us a little bit about his experience translating a source text on the topic of silence, his job, the sign languages market, their evolution and the struggles of getting official recognition and protection.

What drew you to the contest?

As a BSL user, I felt I could offer a unique translation of the text 'Sounds of Silence' especially given that sign language is perceived to be a silent language. I am a registered translator and am always looking for text which tests my translation ability, especially with regards to testing impartiality; could I translate a subject in which I have such a personal vested interest whilst maintaining impartial?

What was it like to translate a text about the contradiction of needing silence while dreading it at the same time into sign language?

I thoroughly enjoyed translating ‘Sounds of Silence’ and I feel that, as a deaf individual, I have a somewhat different perspective to other translators. It is often thought that sign language and deafness means a world of silence, that couldn’t be further from the truth! Sign language has ‘volumes’ just as spoken language does, we shout, scream and whisper, we just do it visually.

Is there anything else you would like to add about the source text or the contest?

It is a shame that my original submission in BSL couldn’t be accepted* as it would have been a real opportunity to promote the positive inclusion of sign language, and demonstrate that BSL is as valid and equal language as English. I do very much appreciate the opportunity which has been given to me to continue to take part in the contest by means of interview instead.

What would you say is your job description? What services do you provide?

I am the founder and CEO of Drip Media. As a company we provide accessible media services which includes BSL translation and interpretation, subtitling, audio description, remote video relay services (VRS) and International Sign translation. We also have a custom video production arm where we make mainstream media.

Personally, I am a registered and qualified translator and I travel extensively providing live face-to-face sign language translation in both BSL and International Sign. I am also quite proficient in American and Danish sign languages. I mentor and train BSL presenters and translators and campaign to increase awareness for BSL and the deaf community.

What services you provide are the most requested in the current market?

There has been an interesting shift in the market recently and we are seeing increasing demand for International Sign (IS) translation. Moreover we’ve seen a rapid increase in video remote interpreting (VRI) for IS bookings and a surge in the amount of webinar video meetings. Our core services, BSL translation and subtitling, are as requested as ever.

How would you describe the current state of the language services industry for sign languages?

Within the UK, there is significant demand for translation services but without full legal protection for the language there is a reluctance from service providers to actually commission translation.

Supply is a postcode lottery and we find that some organisations are fully committed to providing access to BSL users (by having BSL translation of written information and by including subtitling on videos) whereas others will not even provide translation of information which relates specifically to deaf people. It is a constant battle to educate service providers on the need of translation services. Given the economic climate and austerity measures this is to be expected, however the needs of deaf people do not differ in times of austerity or not.

The interpretation industry itself is well established and regulated, but there is a lack of deaf qualified translators. Qualification is expensive and there are limited opportunities for work which deters translators.

How do sign languages evolve over time? What do you attribute the changes to? What role does the media play?

Like any spoken language, sign languages evolve. Signs that were once commonly used are now considered old fashioned and have naturally ceased to be used, barring the older deaf population. New signs are invented weekly as new terms come into the English language; Snapchat, Instagram, and the like.

Sign language is enjoying a rare moment in the spotlight and I personally believe this is because the wider hearing community are now starting to appreciate the beauty and benefits of the language. We’ve had British Oscar winner ‘The Silent Child’ which raised awareness of the difficulties many deaf children born into hearing families face. We have several prominent personalities who use sign language, most notably Nyle DiMarco (America’s Next Top Model), who competed, and won, in a mainstream competition.

Hearing parents are told to communicate with their hearing babies in sign language to advance language acquisition but paradoxically the medical profession discourage deaf children from signing, recommending interventions to ‘alleviate’ their deafness. I believe as recognition of the benefits grows we will see a shift in the way the medical sector views deafness.

I think technology and globalisation will continue to influence our language and I believe we will see an increasing amount of translation being provided remotely.

On a day-to-day basis I don’t think the language will change much, but I do believe there will be more people using it. I would like to think that as awareness is raised there will be a significant uptake in the number of people who want to learn BSL. I would very much like to see the continued increase in the representation of BSL within mainstream media, and more prominence of sign language users - not just as deaf characters with deaf related storylines but as individuals who just happen to use sign language. I would also like to see the continued development of the British Sign Language Broadcasting Trust (BSLBT) and an increase in the number of opportunities for deaf filmmakers.

I know it will be a hard fight but the deaf community will continue to push for legal recognition of BSL as a language and have it protected by law, so that we eradicate the postcode lottery of translation and have full and equal access to information.

What about the language services industry for sign languages? Do you visualize any major forthcoming changes?

It has been a lifelong dream of mine to witness the introduction of sign language in mainstream schools and for deaf children to have access to education in their first language. I am a prominent supporter of the campaign to achieve a General Certificate of Secondary Education (GCSE) in British Sign Language and I believe we are on the cusp of achieving it.

If you are interested in learning more about BSL and its evolution, you can check out the documentary on the topic Ramon directed.

* Unfortunately, the ProZ.com translation contests interface does not yet support video entries.