No, “Nǁng” is not a typo. Nor are its variants “N|uu" or “Nlu”. As you’ll see from the video,  it’s a way of capturing some of the unique clicking sounds in this endangered language, native to the Kalahari Desert.

In fact, there are just 4-5 speakers left, all aged 80-95, in the form of Hannah Koper and her sisters (the last male speaker passed away in 2013), plus a smattering who can recall isolated words.

Nǁng is one of the indigenous languages of South Africa, part of the Tuu language family found in parts of the interior, and in neighbouring Botswana. It’s spoken primarily by the San – the first tribe of hunter gatherers in the area, also known as “Bushmen”. Passed down orally, with no written forms, Nǁng boasts one of the greatest sound speech inventories, with a staggering 112 sounds, 45 of which are clicks. Their signature sound, the “kiss click”, is present in only one other language in the world.

Some theorists consider it the most ancient of all languages to have evolved in Eastern and Southern Africa at the dawn of humanity – the clicks themselves perhaps indicative of the first attempts to articulate sounds into words. Others warn against any attempts to lump the languages of the hunter gatherer communities together, pointing to rich diversity in racial, linguistic and cultural features.

What these peoples undoubtedly share, however, is economic and cultural marginalisation, and the extermination of entire communities in genocidal waves in the second half of the 19th century, involving not only Dutch colonists but also other hunter gatherer tribes. Male speakers were often killed, and females were taken as wives by the colonisers Following the great urbanisation drive in the 1930s most speakers started to adapt to speak Afrikaans and Nama so as to better integrate in the city. The Apartheid era represented the final nail in the coffin, with speakers often victimised. 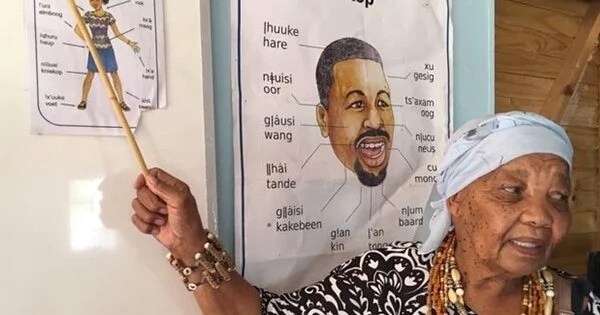 In 1973, when the last speakers were evicted from their original territory, the language was declared extinct, but has continued to hang on by a thread in the form of its final speakers. These women have fought hard to keep their language alive however, giving classes and passing on their knowledge, culture and history. Hanna Koper herself has earned a medal for her attempts to preserve the language, building on the efforts of centenarian Elsie Vaalboi in the late 1990s, a fight she embodied until her death in 2013. Thanks to her efforts and the power of radio broadcasts, another 25 scattered speakers were identified, and were in turn motivated by her motto Sa ǁʼa ǃainsi uinsi ("We move towards a better life"). Other speakers such as Katrina Esau, known as “Queen Katrina”, accompanied by her granddaughter, joined the battle, teaching the language and fighting for their rights. Between thirty and forty children have now acquired songs and phrases in language classes.

British sociolinguist Nigel Drawhall and linguist Sheen Shah have researched speakers and written case studies, while the University of Cape Town has run workshops to preserve the language, and created archives to preserve what material is left. A grammar of the language was published in 2011 by Collins, and a theatre piece has been written to spread knowledge more widely. Meanwhile, South Africa’s Radio Bush has been given a grant to continue to represent local and indigenous communities with some reports in Nǁng, The station suffered under Apartheid but now plays a role in the promotion of diversity and South African heritage.

Still, it’s an uphill battle as the younger generations are inevitably drawn towards English and Afrikaans, the languages of power. Even the older fluent speakers admit to having abandoned their language over the decades in their attempt to fit in.  Nevertheless, there is hope: one 16 year-old student has shown a remarkable facility in Nǁng. and could start teaching it herself in the future, retrieving the language, like Hawaiian, from the jaws of extinction.

All is not lost. Yet. 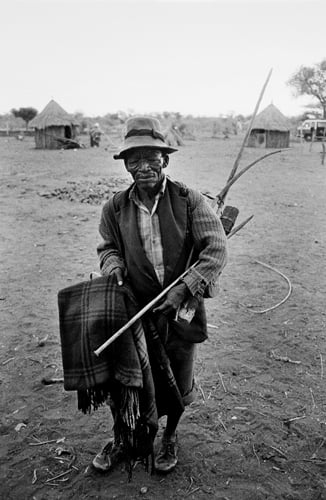