The ability to produce and understand language makes humans unique. That opens doors to people, cultures and ideas. Linguistic diversity shouldn’t be a barrier to understanding, but an opportunity to create a future in which everyone can communicate more easily.

Lara is the story of a girl with a special gift – she can speak all the languages in the world. And she does so simply and intelligently, with a fundamental human touch (being kind and generous when it comes to helping people).

This 'miracle' is put on stage through a surreal fairy tale set on a remote island in the Mediterranean, telling a little story that nevertheless spoke to the whole world. Little like our protagonist Lara, a child born with a special gift: being able to speak every language in the world. A gift that she generously and positively chooses not to keep to herself, but to share with her whole community to help people in a host of situations.

The character of Lara and her relationship with the island's residents constitutes the key element of this film, in which our aim was to portray Translated's digital service through a wholly warm and human story with an analogue and timeless spirit like any fairy tale, one in which we don't know where the myth ends and reality begins.

The result is a tale that seems impossible, but that all translation workers bring to life every day.

That’s why the whole film is dedicated to all those who work as translators, project managers, software engineers and others who make our lives easier and global communication more meaningful.

The importance of understanding between people lies at the heart of this project, and Translated chose Auge, an independent creative agency based in Milan, to develop this creative concept. They are a small team who loves to think big: the same mentality that can be found at Translated. Since this is the first film in the brand's history, they made a joint decision to focus on Translated's values rather than simply on its services, striving to convey these values through what we could define as a fully-fledged short film and not just a commercial, in which translation becomes a wonderful and magical gift that improves lives and allows people to reduce the distance between themselves and the world.

Every element of the film serves this message and aims to communicate this warmth and humanity: the choice to use only local residents rather than professional actors; the realistic approach to the direction; and the music, made specially for the film, played entirely by an orchestra of analogue instruments and closely tied to the musical traditions of the Mediterranean.

The commercial was shot in Salina, a small island in Sicily, during a break in the 2020 lockdown. 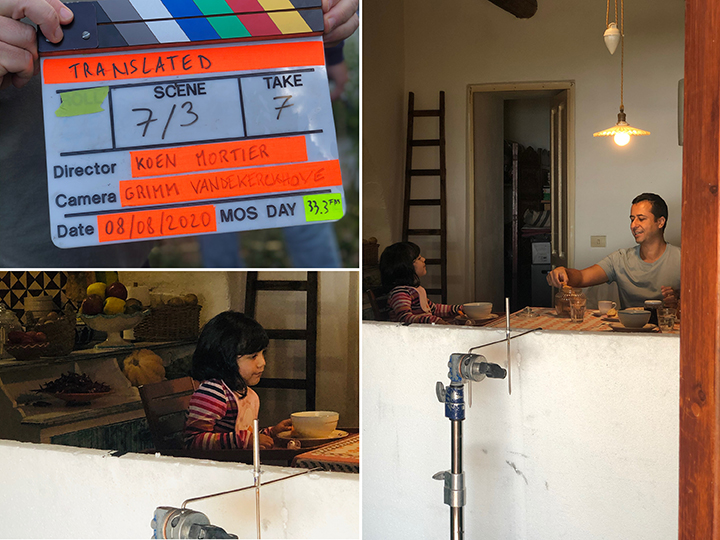 It was directed by the Belgian director Koen Mortier, who also creates feature films – in fact, he’s working on a new film right now. Thanks to his natural and decidedly human touch, he approached the story with sensitivity and substance.

The short was shot over 4 days of production, with a cast made up mostly of locals who were acting for the first time in their lives. For example, a school teacher played the medical specialist, the town's pharmacist played the role of the general practitioner, and two pairs of sisters played the main character Lara at different stages of growing up.

The music was composed specially by two Italian musicians, Michele Braga and Emanuele Bossi, who are already working on several film soundtracks. The scores were then played by superb musicians from an orchestra of analogue instruments.