In the age of digital nomadism, upping sticks and seeking out a new place to live, along with all the novel experiences that go with it, is an option open to all. But perhaps as translators, armed with our language gifts and proven cultural adaptability, we are particularly well-suited to such a choice. We can look at a map, stick a pin in it, and pretty much decide where we want to make our new home. Which is exactly what Emilie Himeur did one fine day. As a French native speaker working from English, she indulged a deeply felt longing to live by the sea, coupled with a need for some sunshine, a beautiful language and a quality approach to life (not to mention an economic context less challenging than those of France or England) … and decided on Genoa. 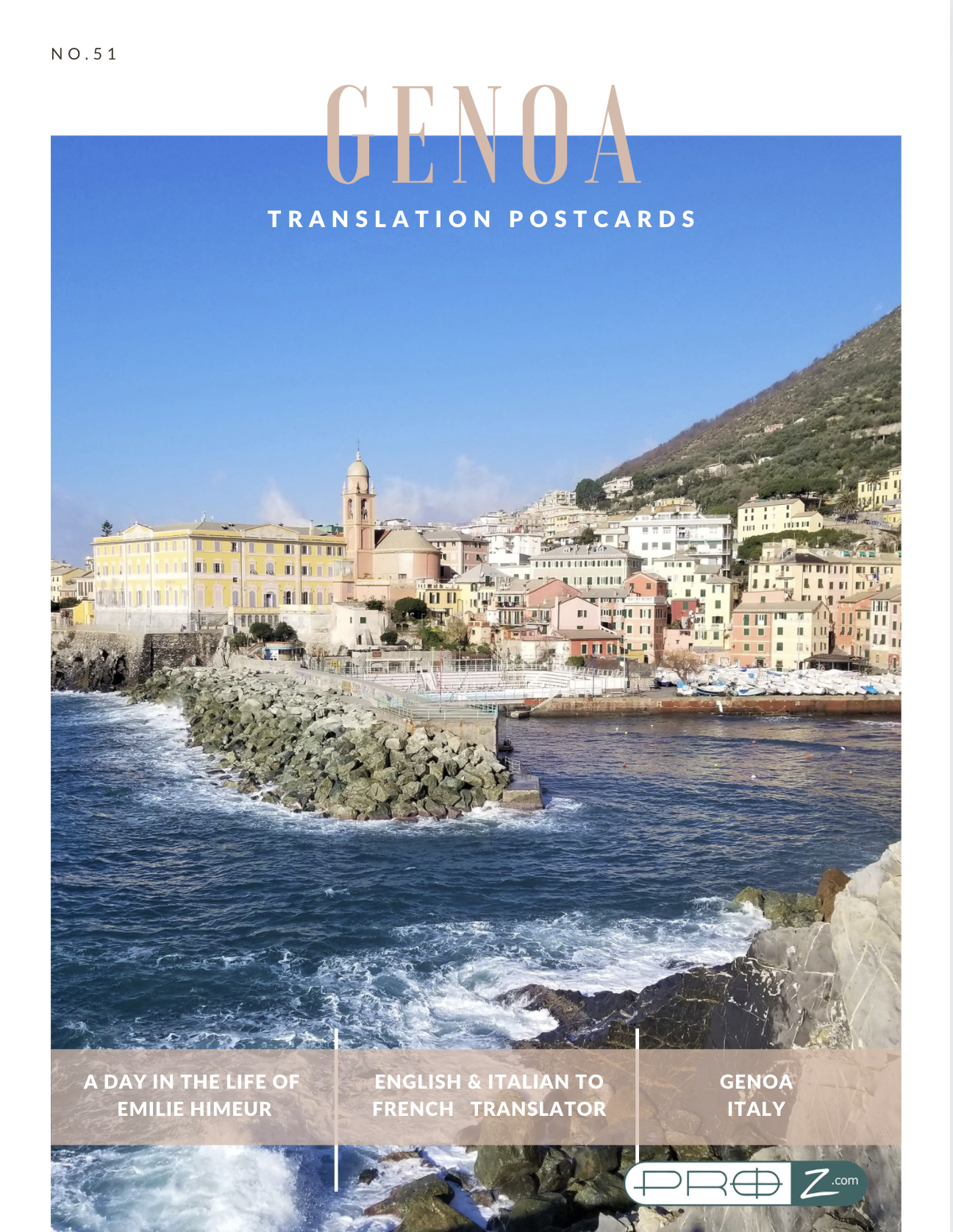 The city (Genova in Italian) is capital of the Liguria region and is the sixth largest in Italy. For over seven centuries (from the 11th to 1797 to be exact), it was one of the most powerful maritime capitals, and flourished particularly from the 12th to the 15th centuries. It played a leading role in commercial trade, became one of the continent’s foremost naval powers and was considered one of the wealthiest cities in the world. In addition to its historical wealth, the city also has a tradition of culture – it was the birthplace of Columbus, Paganini and famed architect Renzo Piano. You may also be interested to know that its flag is that of St George – the same in fact as England, although you’re strongly advised against referring it as “the English flag” when in the city… 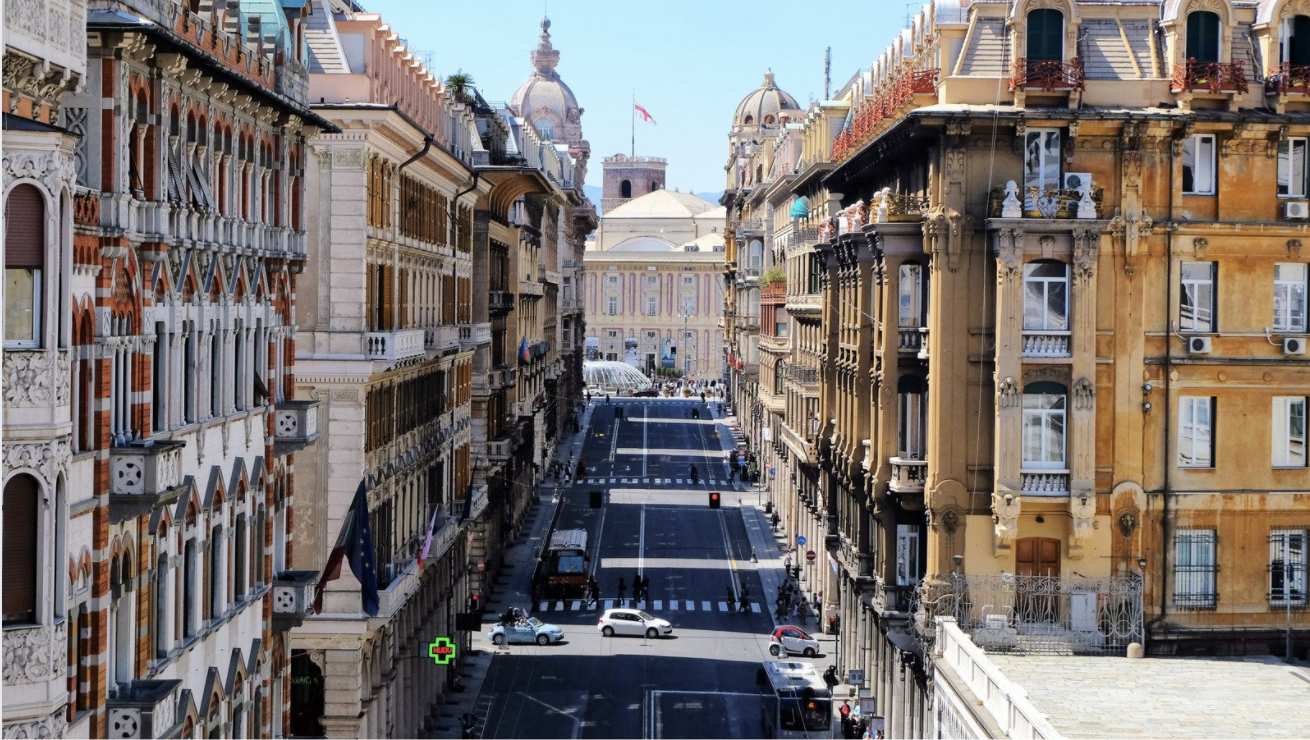 In the extreme southeast of the urban area is the charming district of Nervi, once a fishing village, and dotted with colourful centuries-old villas, scenic botanical gardens and the Passeggiata Anita Garibaldi, a 2 km seaside promenade to which the Genovese flock on weekends. The air zings with the scent of ubiquitous lemon and orange trees interspersed with olives and palms, and there are plenty of narrow passageways known as creûze, connecting the hill to the sea. On the culinary front, pesto and focaccia are local specialities, so you’re unlikely to ever go hungry here.

It’s easy to see why Emilie chose the city and this district in particular – they ticked all the boxes. Big enough to have a varied cultural offer, small enough to remain affordable, well connected to France, and located on the coast. And when she actually visited the place, it was love at first sight. 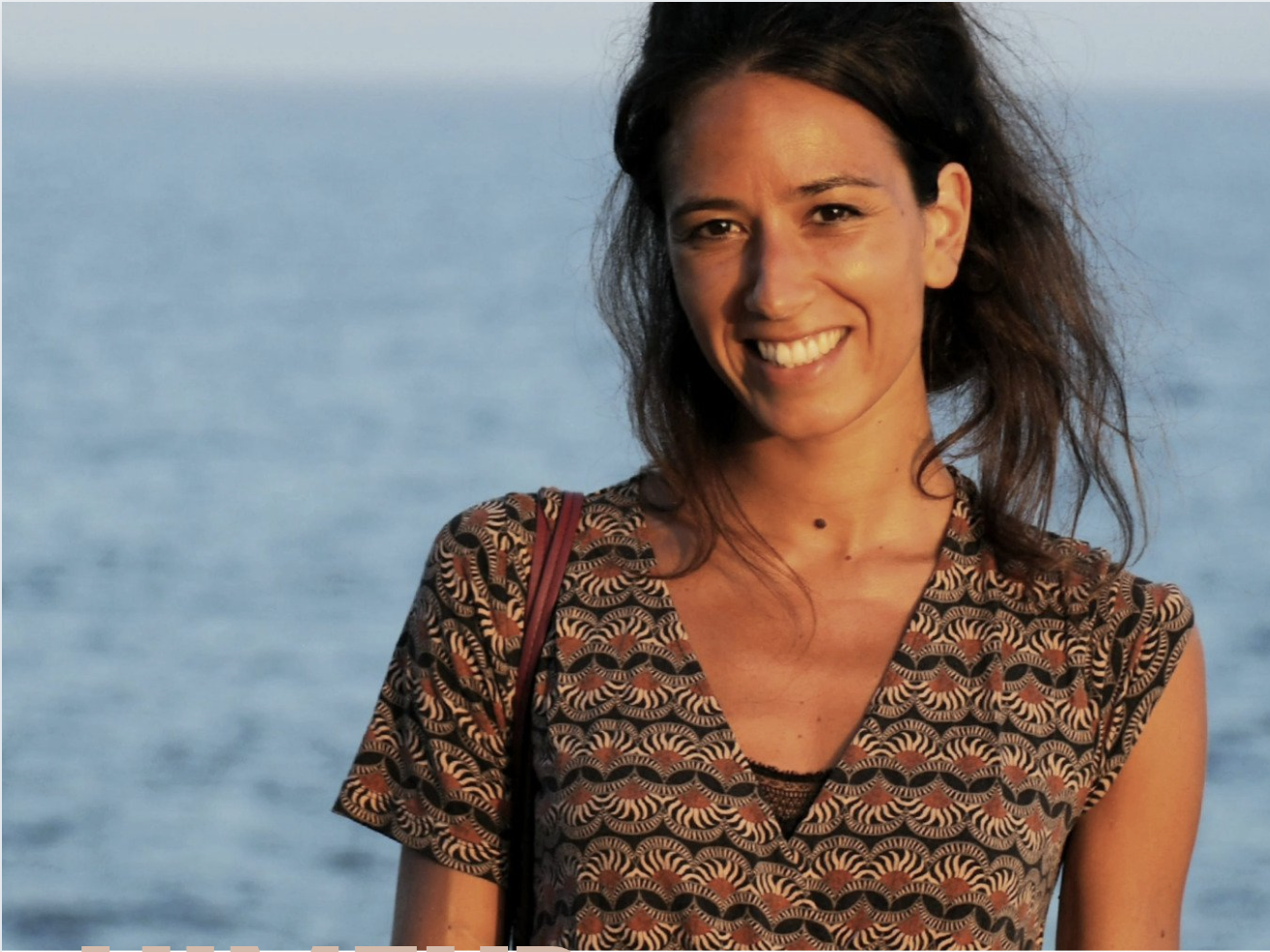 But Emilie’s translation story goes back beyond that. Having graduated in marketing and then studied political science in Bordeaux, picking up a PhD in the process, she moved to England a couple of years later and eventually found a job as a “French linguist” (translator and reviser) for an LSP: an in-house position which also included training. The job went well enough, but that yearning for more southern climes soon began to make itself heard, and the move was an easy decision – not just to Italy, but to the freedom of freelance life.

Learning Italian was of course a natural step, although like many people who arrive in a foreign country as adults, Emilie hasn’t always found it easy to get opportunities to actually speak all that much, beyond superficial conversations at the café. If you don’t have colleagues a workplace, or a partner, acquiring fluency can be a real challenge. Her partner is an American (which explains her American-accented English), and much of her social life is in English too – that’s just how things panned out.

It was shortly after her arrival in Italy that, having set up a free profile with ProZ, Emilie saw a call for entries to a translation contest. As someone newly starting out as a freelancer, she thought it would be a good opportunity to get feedback, so she copied out the source text and translated it. It was only when she returned to submit her entry that she realised it was only open to paying members. By that stage, she’d put so much work into it, it would have been frustrating to let the whole thing go, so she paid the membership fee – and won the contest! 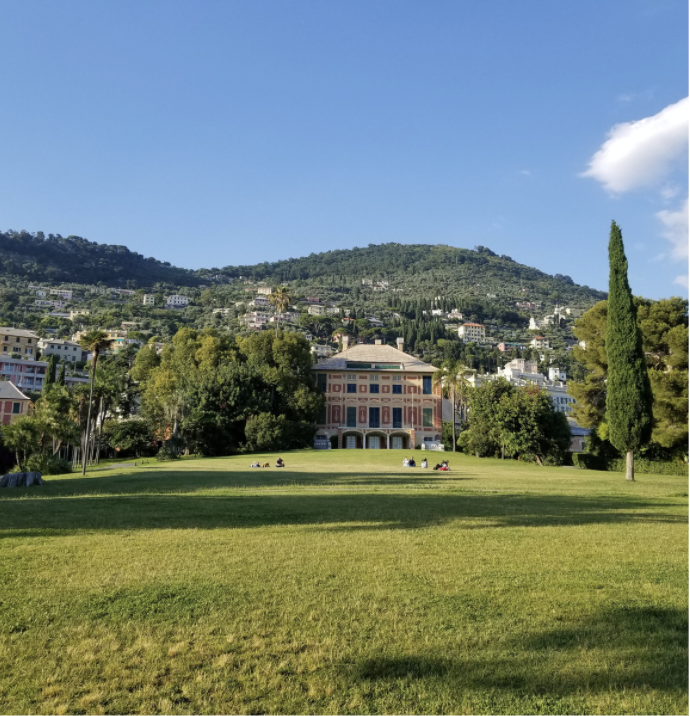 A few months after that Emilie got her main client via a job posted on the Platform, which soon paid for her membership. She’s been a member ever since – and can’t even imagine not being one. She’s also a member of the Translation Mastermind group, although a self-confessed tendency towards introversion and impostor syndrome around her (excellent) English holds her back at times from making the contributions she’d like to make.

The day begins around 7-8 am: there’s no need for an alarm clock when your dog Aristote makes sure you wake up to take him for a walk. And that’s the first thing Emilie does, not feeling entirely awake before she’s had a dose of fresh air, sea views and natural light. The morning ritual is not quite complete though until she’s made coffee in a typically Italian Moka pot.

As is the case for so many of us, her schedule can vary greatly from day to day – alternating between super busy and unoccupied. But rather than stressing when things occasionally get quiet, (Emilie claims an aversion to marketing despite having studied the subject), she studies Russian or meets friends for a coffee or the odd aperitivo. Not to mention a dip in the sea – though only during the summer…

She tends to work on weekends– avoiding the hordes of Genovese that descend on Sundays – and preferring the occasional quiet weekday off. Working on Sundays also allows her to concentrate fully on texts without attending to emails from clients – the freelance life is all about minimising pressure. 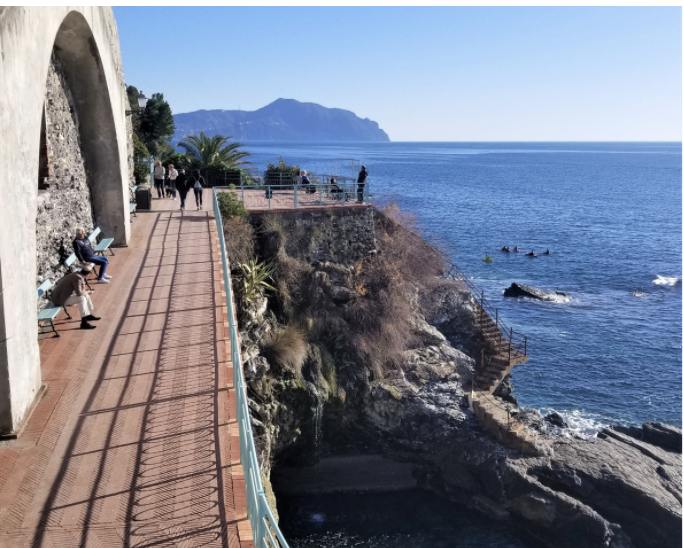 Emilie’s four main fields of specialisation are psychology (articles, in-app content and meditations), humanities and social sciences (research papers), marketing, and HR. Most of her work is with international agencies – which makes perfect sense as she mainly translates from English.

The biggest challenge of living in Italy has been on the administrative side: the clunky bureaucracy doesn’t make it easy for you when you’re self-employed, especially when you’re a foreigner (even though it’s slightly easier when you’re from the EU). You really need an accountant, known as commercialista, who acts as an intermediary between you and the tax administration. Which is absolutely necessary, Emilie claims, because taxes are very high.

When asked to name a quotation that inspires her, Emilie says she is not really into inspirational quotes but nevertheless likes the spirit of this line from The Dharma Bums by Jack Kerouac: "One day I will find the right words, and they will be simple."

A motto to suit translators, writers, revisers, and all those who make their living from words.