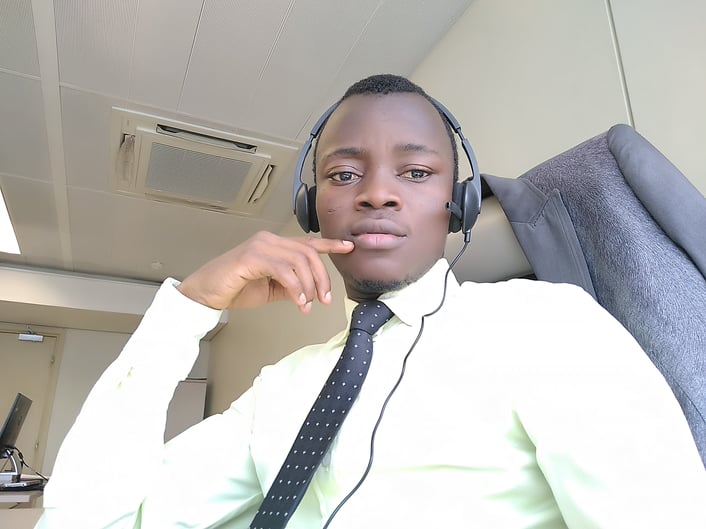 In fact, this country of around 12 million inhabitants is home to no fewer than 85 languages. French enjoys official language status, but so do Fon, Yoruba and Bariba. In Achille’s home in the town of Dassa-Zoume, Itcha was spoken, but any sortie was just as likely to end in a conversation in the related Idaatcha (both are distant dialects of Yoruba), or the completely different but widely spoken Fon.

Against the background of such a melting pot and the demands of endless code-switching caused by such a patchwork of languages, it’s no wonder Achille became an enterprising and successful interpreter while still in his twenties. But let’s not jump ahead…

In fact, as a young boy, Achille never gave translation a moment’s thought. In the economically disadvantaged central region, the only real option ahead seemed to be a path into teaching – that’s what you did if you were good at secondary school, where just about the only equipment you had was your paper notebook. But one day his father came back from the town brandishing a sort of phrase book with French and English words, and Achille fell upon it with zeal. Already adept at French of course, because it was the medium of instruction in school, he devoured the book, spending the whole holiday poring over its pages. And soon, inspired by this head start, he was among the best in his class in English.

It was the practice for teachers to direct students into the arts or science streams at the school, and Achille’s teachers encouraged him towards languages. However, he wasn’t at all happy about it – most of his friends were guided towards sciences. Dejected, Achille complained to his father, who in turn visited the school to contest the decision. However, an English teacher happened to be in the room as he met the director, and only reinforced the prevailing view that Achille was a gifted linguist. There was nothing he could do.

Looking back now, he has a different take of course. Alongside French and English, the course demanded a third language, and in this case it was German. Even though he scored even higher in German than in English, he said he was never in love with it, unlike his all-consuming passion for English (which manifests itself in the total fluency with which he now speaks).

His teachers were right: a fine future lay ahead. Having gained a place at the prestigious National University in Cotonou – about 200 km by bus from home – Achille moved to the economic capital (the political capital is Porto-Novo). There he studied French and English and enjoyed every minute of his university years. He still had little idea as to what would come next – only that it would not be teaching: that much was clear. On a visit back home after graduating, his father asked him “You’re done now?”, fully expecting him to return home. But no, Achille wasn’t done, and planned to return for a Master’s in Applied Linguistics.

While on the course he had one of those defining moments that can change the course of your life, when he met an English as second language trainer/“coach” who not only enrolled Achille into his English language training operation but also gave him occasional texts to translate. And so between 2013 and 2016, he operated as a part-time freelancer, between translating, training and interpreting.

By now he’d been truly bitten by the translation bug, and over the coming years learned a great deal from having his texts revised. It came as no surprise when he won a scholarship to the Pan-African University programme funded by the African Union, which involved him moving to Cameroon to attend the course run by ASTI (Advanced School of Translators and Interpreters) – the best in the continent.

That took him to 2018, when he relaunched his career with a renewed sense of purpose and expertise, in addition to enhanced confidence and skills. This renewed burst of energy, coupled with the extensive network of excellent professionals he’d built up while on the programme, led to a whole slew of new opportunities.

The first of these was an in-house position as an intern at the African Development Bank, an institution of vast importance across the continent and beyond. That was followed by an internship at the United Nations office in Nairobi, receiving UN training in interpreting. But his inclination was towards freelancing, and in 2019 he was back home. Again, he had to contest with the views of those around him who opined that a job at the ADB was both reputable and solid, but he stuck to his guns.

2019 started well enough, with contracts mushrooming, but then in 2020 the pandemic struck, in Benin as everywhere else in the world, complete with lockdowns and a slowing down of business activity. A difficult four or five months without work followed, although there were voluntary assignments in RSI. But it was about that time that Achille hooked into communities like this, both on Facebook and LinkedIn, and began to broaden his ideas about what freelancing and business involved.

He was initially astonished to see how much information was being shared. “We don’t share that much in Africa,” he says. He was just as surprised by the lack of competitive spirit amongst professionals in such groups. At the same time his own profile was rising, by attending Canada’s OTTIAQ events online, learning to use LinkedIn, and even being featured in a magazine article. Soon enough the clients began to throng back, enabling him to move beyond surviving and enjoy the experience of thriving.

It’s certainly worked out for Achille. In a country where a teacher might earn USD 300 a month, he as a freelancer has had months which have multiplied that by a factor of 15. Even though money is quite a taboo subject in Africa, and he's not one to boast, that is a phenomenal achievement. Meanwhile, freelancing is not widely known, and people tapping away at their computers all day long are often referred to as “gaymen”, meaning “conmen” – the sort who launch online scams. But none of that is off-putting for Achille – he knows his results speak for themselves.

And he's still early on in his career. A bright future lies ahead – one that he hopes will involve plenty of travel. A visitor already to several African countries, he has set his sights on touring many more around the world. His enthusiasm and positive outlook will no doubt serve as an excellent passport…