Face to Face with Aktan Aydoğmus

Aktan Aydoğmus is firing on all cylinders – a man at the top of his game. When not interpreting at international conferences for the UN or NGOs, he’ll be at the Ministry of Family, or of Justice, or Health or Fisheries, in his home city of Ankara, attending high-level talks on the pandemic, the ongoing war, fish stocks in the Mediterranean or other weighty political matters. Given that Turkey occupies a very strategic geopolitical position, there’s always plenty to say. And seeing as these talks often spill over into dinners, the working day can be long. But Aktan has all the energy required for the job, and plenty more to spare… 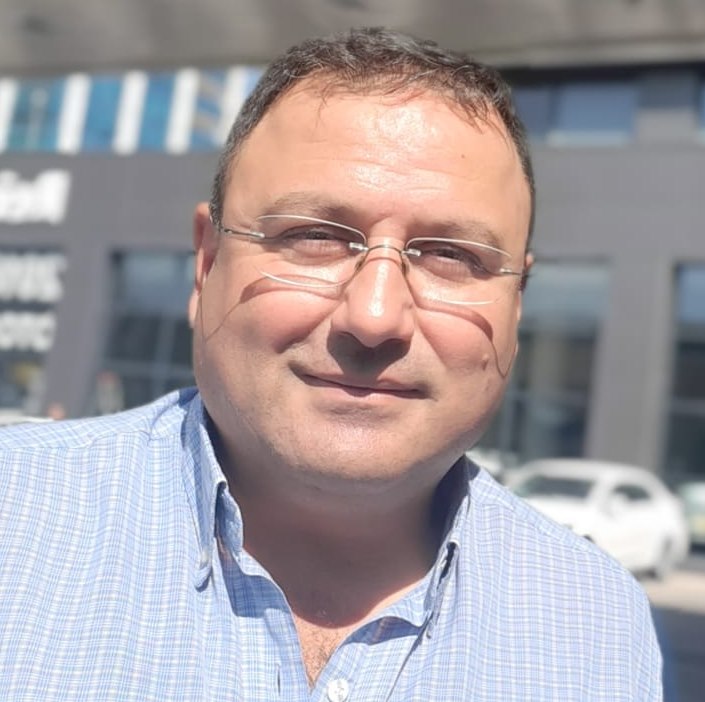 A career in languages and international relations was perhaps inevitable given where it all began. His father was an attaché at the Turkish Embassies in places as diverse as Addis Abeba, Stockholm and Bonn. The young Aktan soon became adept at switching schools, cultures and languages, and today he is totally fluent in Turkish, German and English, not to mention easily up to the task of discussing the meaning of life in Swedish and Spanish ¡. Along the way he witnessed scenes traumatic enough to remain in the memory, such as bodies being piled into carts on the streets of Ethiopia, but also enjoyed the privileges of life in the leafy suburbs of some of Europe’s most attractive and cosmopolitan cities.

He was only 13 or 14 when he first began ad hoc interpreting – his flair for languages making him the go-to adolescent for family friends and neighbours dealing with challenges from the immigration authorities to real estate, and from municipality procedures for refugees to matchmaking – all for pocket money. Meanwhile, even when “off-duty”, he was often called upon to interpret what was going on in the news or other programmes for his monoglot mother or other family members at home.

Years later, when his father was posted to Syria, Aktan opted to stay in Europe and studied political science in Bonn, working variously as a janitor, handyman, bartender to pay his way. Following his studies, he first decided to pick up experience in the business world, in mobile phone marketing (these were the early 1990s, when these strange chunky new devices first appeared). In fact, he thrived on the human contact, discovering the joy of talking to people, negotiating, bargaining and convincing – all skills which would stand him in great stead for his later career choices.

Alarmed by the brain-drain of Turkish professionals to the West, Aktan chose to make his own small contribution to reversing the trend by returning to Turkey after 15 years abroad, equipped with his five languages. His German degree set him up ideally to help his country develop – but his lofty aspirations soon ran into challenges. Attempting to be an independent and unbiased researcher at think-tanks was as unusual then as it is now. Political pressures from above and exposure to plagiarism (many of his articles were simply lifted and republished by his seniors) led him to resign and instead seek out an opportunity to put his languages to greater use in the private sector, working in the foreign trade departments of industrial countries. But it soon transpired that he was overqualified. What’s more, salaries were low, with no shortage of people prepared to take lower pay queuing up for the same jobs.

Around this time Aktan launched himself into freelance translation, starting out with legal documents, but then expanding to 800-page contracts, technical specifications, tender documents and annual corporate reports, even taking on entire books with his name on the cover. He built up a collection of some 20 agencies, as well as ministries and multinationals. However, this flurry of activity, despite the income, had a downside. The gregarious personality developed during the marketing years was being neglected – he spent long hours at home, and work began to feel antisocial, even prison-like. The stresses of finishing and delivering one large-scale project after another also played a part, as well as the strict deadlines and demands of distributing large texts among outsources. As if that weren’t enough, he also helped out at his wife’s pharmacy – serving customers over the counter while translating texts on the side. And did we mention that by now there were two kids in the mix too? The advent of CAT tools, complete with the upward pressures on productivity and the downward pressures on rates was the last straw – a trigger for professional transformation

It was time to get out and breathe some fresh air. Interpreting seemed the obvious solution. However, the dream start turned into a nightmare, and Aktan was fired from his first assignment for using a wrong term, between the Turkish ministry and an EU auditing delegation. Undeterred, he learned the lesson and realised the vital importance of research and proper preparation. His family background, academic prowess and international exposure all helped, and he soon gained renown as a protocol interpreter working at various official occasions. His clients included Ministers, parliamentarians, directors of international organizations, police chiefs and even intelligence agencies. He accompanied delegations on state visits, to trade fairs and cultural events, doing simultaneous and consecutive interpreting in a wide range of situations.

All of which led to the point where now, several years on, he works mostly for the UN and EU, dealing with hefty issues as varied as migration, the environment and renewables, economic development and entrepreneurship. Switching seamlessly between German, Turkish and English, he is sometimes booked on purely German-English assignments by clients in Germany, Austria and Switzerland. His vast range of clients now turn to him not only for interpreting but also consulting, planning trips, or giving briefings – additional skills that make him stand out still further from the crowd.

Apart from the obvious advantages of his upbringing and international life, he ascribes his success to intense curiosity, a high level of personal organization (confirmed by the detailed notes he had prepared for this interview!), the will to research and learn constantly, an awareness of the bigger world picture, the joy of giving back via occasional pro bono work, and above all, knowing your value, and competing on quality and skills rather than pricing.

An active member of the ProZ.com Facebook community, Aktan loves the cosmopolitan nature of the group – world citizens from all kinds of specialisms who treat each other in a mature and respectful way. Rather than having to scroll through endless Google references, this is a group, he says, where you can get an answer to just about any question, and fast. The diversity, from LSPs to NGOS, and from linguistic gurus to grammar buffs, historians, lawyers, medics, makes this a broad network to be treasured. As well as a place to share concerns and queries about the future, he sees it as an opportunity to raise awareness not only of Turkey but of the Global South in general. For all the criticism of rates practised and accepted in countries outside the Western bubble, he reminds us that in fact a community like this serves as an inspiration to all those working in more difficult economic environments not to lower, but to raise their rates, as they rub shoulders will colleagues across the world.

Despite his busy timetable, Aktan also regularly trains interpreters and translators, offering the sort of practical insights that are hard to come by on academic course, as well as attending seminars and workshops to speak about his experiences. He also plays an active role in “speaking clubs”, encouraging locals to use their foreign languages. And then there’s his own Facebook group, focusing on literary translations, Turkish renderings of metaphors, quotes from gurus and poetry and a whole lot more.

Away from the language front, he’s figured as an extra in several TV series, sometimes even with speaking parts. Meanwhile, during the four-month lockdown, he drove a taxi for embassy and business world clients, making some great contacts in the process. And when the talking is done, he picks up his guitar and can reel off hundreds of Turkish folksongs.

Clearly a man for all seasons…