Caroline was already learning French aged 9 at a preparatory school in England, and in her mid-teens she enjoyed exchange visits with school students her age in both France and Germany. Her German teacher also taught Italian and prompted her to add her third foreign language. Latin was a key part of the school curriculum, too, and in fact she studied it through to A-level, along with French and German, but she had scant regard for dead languages, just as she later failed to wax enthusiastic about shorthand while studying for a post-grad diploma as a bilingual personal assistant. Languages are not desiccated objects on a page – they’re first and foremost communication tools for someone as naturally gregarious as Caroline. But she wasn’t done yet – she added Dutch during that diploma course, rightly figuring that her German gave her a massive head start... 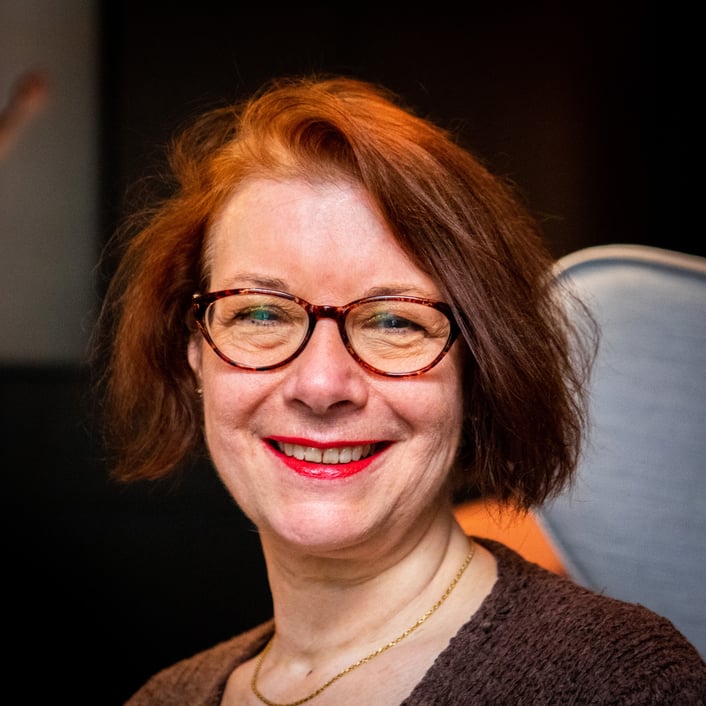 On leaving university, it was clear that teaching was not an option, which left a rather limited field of choices for someone with a language degree. Translation was of course one of them, but in those pre-Internet days the idea of being locked away in isolation with only dictionaries for friends was distinctly unappealing. And so, as graduation approached, Caroline set her sights on becoming a bilingual personal assistant, with German as her main language. However, there was one more course of action on the table. The professor of Italian on the post-grad course was in the habit of sending a small group of students to Italy each year, on a work placement at the once-great Olivetti, who, having started as a typewriter manufacture now also made computers, printers, photocopiers and sundry other items of office equipment. Caroline was keen to go, but the professor was reluctant. Her other envoys had full-blown degrees in Italian, whereas Caroline merely had an O-Level and one year of university study. However, not everyone was as eager to up sticks and head off to northern Italy, and so a space opened up for her, initially on a one-year contract. That one year would turn into 15.

The setting was the small town of Ivrea in Piedmont, the foothills of the Alps – the company’s national head office. With a population of just 20,000 (incidentally the exact same number of employees at the company), it was a small place – the sort you could fully explore in a single weekend – but with easy access to the lakes and the stunning Alpine scenery. As well as organising skiing lessons in the winter, the company offered flexible hours in the summer, so that if you started at 8am, you could clock off at 4pm and enjoy the delights of the region. That was followed by ten years in Milan, seat of the company’s international operations. Olivetti opted for the noble choice of not outsourcing work to countries with cheaper labour – and paid the price in a cut-throat world. “Made in Italy” was a standard they proudly upheld, but it ended up putting them out of business.

As you can imagine, after 15 years in Italy, Caroline’s Italian was excellent. Unfortunately her Dutch had atrophied (although she has since brought it back up to working level – her third Diploma in Translation is in Dutch to English), but her work in Milan gave her frequent exposure to French and German. Between trade shows and business travel, there was plenty of practice, and she kept both languages nicely on the boil. Being one of the few native English speakers in the Advertising department, where she was now working, she also had plenty of opportunity to translate Italian presentations and marketing materials into English.

A brief sojourn in England for a meditation retreat (one of Caroline’s lifelong passions) had led to a romance, and then a marriage. Caroline’s last five years in Italy were therefore as part of a couple, but the weight of the country’s infamous bureaucracy, coupled with her husband’s allergy to Italian pop music, led ultimately to a decision to go “home”. By that time, they had two small kids, and so the first few years back in Britain were spent on domestic management.

However, during that period Caroline managed to devote a few snippets of time to translation, responding to ad hoc requests from a friend. She also worked for a couple of years as a promoter for a dance company. But then the couple decided they needed not one but two salaries, and the idea of translation popped up once again. Having made enquiries at a couple of agencies and been told in no uncertain terms that job offers without training were likely to be few and far between, Caroline took the DipTrans in Italian to English in 2000, followed a year later by French, picking up a handful of merits and distinctions in the exams.

So impressed was the DipTrans course leader at the University of Westminster, in fact, that she asked Caroline to teach the Italian course to new hopefuls, and so it was that she ended up teaching translation before ever working as a professional translator. Still, the course was devoted purely to teaching students how to pass the exam, something she had proved she was capable of twice over, so her relative practical inexperience was not a handicap.

Almost 20 years have passed since then, and Caroline says her translations have improved immeasurably over that time – particularly in the esoteric art of moving away from the source text, sacrificing narrow fidelity for something that’s much more natural and akin to the holy grail of texts which could easily have been written in the target language in the first place. She ascribes that improvement not only to years of experience but also to some eye-opening conference sessions, led by the likes of Chris Durban, along with an increasing realisation that in a world of ever-encroaching MT, translators need to add value over and above the magic of algorithms – or risk going the way of Olivetti…

In addition to honing her skills, Caroline has also come to realise the importance of specialising. And, in her case, it’s quite a niche – marketing for manufacturers in the built environment – a subject she finds not only interesting but also purposeful, as it has all kinds of implications for zero-energy practices, recycling and waste disposal, all of which appeal to her acute social conscience.

Now, while adopting such a niche need not preclude the taking on of other texts – such as translating a cookery book – the very act of labelling yourself projects you into a sort of alignment with who you are and what you stand for, which by some inexplicable and possibly mystical force sends out molecules of energy into the ether, and ultimately attracts clients of like mind. People, she says, like to categorise, and claiming a specialisation helps that process and makes you an easier fit for clients in whatever field it is you choose.
But that’s not the only business tip Caroline has to share.

Other pet themes are the importance of building visibility, and above all of networking, and in fact getting to know a small group of London-based translators within the Translation Mastermind group led to a unique and original project: “The Translator’s Little Book of Poetry” – less a collection of translated verse than the use of poems to illustrate key points about translation. Available to order from bltcreations2020@gmail.com! A firm believer in the importance of both informal and formal collaboration, Caroline has since reached out to other translators and created teams for various projects, each person working on their own speciality.

Away from the wordface, Caroline has been an amateur actor since her university days. In fact she suffered initially from over-identification with each character she played, and it was meditation that taught her who she really was, and enabled her to approach new parts with greater confidence. It clearly set her up for a life as a freelancer too. Because when it comes to choosing texts, collaborators, clients and projects, there are few things more important in freelance life than understanding who we are, and acting on that understanding to carve out our own unique path...