Face to Face with Daniel Coria

Whatever route our journey towards freelance translation or interpreting has taken, the chances are that along the way, there have been a few key figures who’ve helped us, and pointed us in a certain direction. A parent, perhaps, a boss, or a mentor within the profession. In the case of Daniel Coria in his late teens in Buenos Aires, that role was played by an inspirational English teacher, who not only spotted his classwork but actively encouraged him towards a career in translation, putting him in touch with contacts of hers in the local industry. And the rest, as they say, is his story. 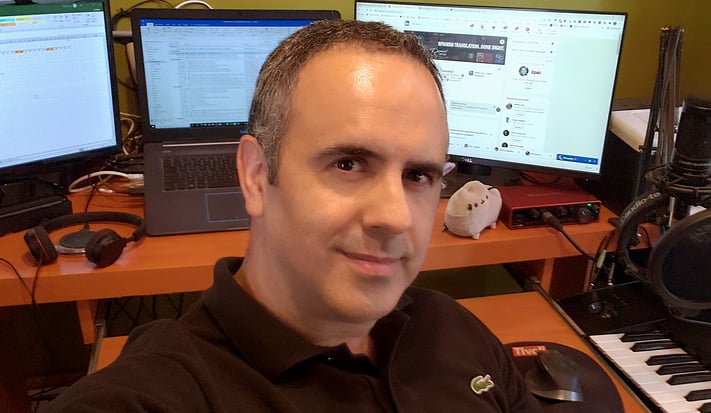 Like many young people in outward-looking Argentina, with its long history of immigration and interaction with the wider world, Daniel has reached a highly impressive level of fluency in English, added to a smattering of other languages. In fact, given that his Dad was employed by IBM, his initial leanings were towards a future in tech or engineering, bolstered by private lessons in computing and English, coupled with his studies at a technical high school. But once that decisive career advice planted a seed in his brain, it’s been languages all the way ever since.

One thing was clear to Daniel from very early on: irrespective of career path, he wanted neither a boss nor employees. A born freelancer, you might say – in a profession where quite a few translators become freelancers simply because there are not enough in-house jobs – in other words, through coercion rather than choice. But not in this case. Aware of the risks, the need for a certain sense of entrepreneurship, the absolute primacy of customer service, he set out in a more constructive way than many on the path towards building a successful business, brick by brick, even marrying another translation graduate along the way.

But it didn’t happen overnight. In fact, Daniel started out in teaching for a few years. Even though he’d been working on occasional translations ever since his university days, there simply wasn’t the volume of work at the beginning to make the leap and turn fully freelance. And in a country like Argentina, where the economy is never entirely stable, it was essential to have plenty of foundations in place before giving up teaching. So one client at a time, he built up a presence, gradually easing off on the teaching, until in 2004 he gave up altogether, and declared himself a full-time freelance translator.

Now 25+ years into his career, with several long-term client relationships under his belt, and a keen understanding of the value he brings as a language expert, Daniel’s trajectory is an impressive one. And beyond the purely commercial success, it’s clear that he’s given both translation itself and the subtle art of freelancing a great deal of thought, developing interesting insights and theories along the way.

One such insight, for example, is his theory that speciality is to some extent an illusion. Zoom out from any text, Daniel says, and you see that it is talking not about this or that gizmo, historical fact, or legal condition, but about the world itself. And this despite the fact that he does have a great deal of technical knowledge about IT for example. He can assemble and disassemble computers and other devices, and there are few plumbing, electrical or carpentry jobs to which he can’t turn a hand. Nevertheless, it’s not that close-up knowledge he injects into his translations, but an ability to take the wide-angle view, and see each text as a message from a human being to another, designed to sell, persuade, educate, inform. And it’s that underlying human interaction that then determines the entire course and choices involved in the translation. Similarly, even after amassing considerable expertise in financial documents, following a break from a New York City agency, that same deep understanding of communication between people is what drives his work.

With his long-standing interest in NLP and similar techniques, it’s perhaps no surprise that Daniel traces a direct line from the utterance of a single word to a thought, feeling, action, habit, character and even destiny, all within an individual. The way we speak of and look at the world, he says, determines many of our outcomes. “Show me how you speak and I’ll tell you where you’re heading” sums it up. And of course the converse also applies: “Show me where you’ve got to and I’ll work out how you speak.”

It follows from such a stance that the way we interact with clients is of course a key determinant in the health and wealth of our business endeavours. Quoting a few inspirational titles from his extensive reading on the subject, Daniel sums up the art of dealing with clients pithily as “Letting other people have your way”.

Of course that takes a certain level of awareness, of interpersonal ability, and of flair and charisma, meaning that it’s perhaps not a route that everyone can take with the same aplomb, but the core message does indeed apply to each of us, no matter where we are or how successful we aim to be. Making it in freelance life, he says, is more about what you can do for the client than about obsessing over what they can do for you. And in that key shift lies more than a grain of truth.

A few years ago, in abandoning the capital for the mountain village and ski resort of San Martín de los Andes, Daniel and his family opted for a change of lifestyle and pace – a feasible move in an online world. No interruption therefore, in his relationship with one of his favourite clients – a manufacturer of high-end wireless speakers, who turn to him for more than just translations. The role he plays for them is more akin to that of language consultant – offering input on slogans, marketing and the like. That’s certainly one way to stand out and to render your services less dispensable in an age of encroaching machine technology.

Within the group Daniel is upfront – as he should be – about the role of contributing. As motivated as anyone else to share his insights and wisdom, he is not blind to the benefits of being “out there”, having your words (and face) seen, and building up a reputation as a seasoned and helpful presence. If his words help one person, he says, then it’s worth all the sharing.

But any participation in a community like ours is a question of both give and take, and Daniel enjoys being able to hang out – however virtually – with people of like mind. People who “get it”, and with whom he shares the joys and frustrations of this constantly changing profession.

And when not translating, consulting, mentoring or simply appearing on Facebook, LinkedIn and Twitter, Daniel has an interesting hobby up his sleeve (no pun intended): that of magician. What began as an interest in and gift for various sleight-of-hand tricks grew into an amateur pursuit that earned him quite a few gigs and shows along the way.

Quite an appropriate pastime, you could say, for a translator, given how we conjure up new texts on a daily basis. Perhaps there’s a little magic in all of us – as long as we know where to find it, and how to use it to our best advantage.