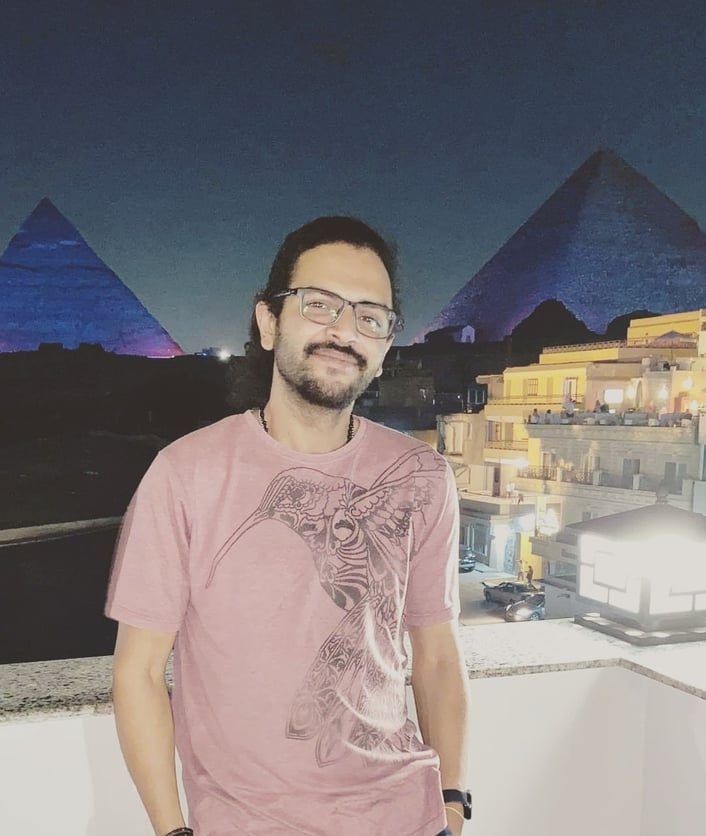 Now fast forward a few years to when Islam was 18, and finally made his way to Egypt. Although Cairo seemed strange and different in every possible way from Dubai (traffic, noise, cleanliness, the total presence vs total absence of rules), the positive side of all that roaming began to dawn on him – a sense of being truly international, as well as a heightened sense of curiosity and openness to different cultures. It left him truly able to see life differently through a variety of lenses. So much so that he finds it difficult to identify with one just place. As he wittily puts it – if there were a citizenship for people who don’t want to be citizens of any one country in particular, he’d be the first to sign up.

His flawless lightly American-accented English dates back a long way – not only to his international schooling but also to a six-month stay with a British family in Dubai as a six-year- old, when his father was on a way on a particularly challenging mission (not the first, as in fact his father had been on duty monitoring the Gulf War when Islam was born, and didn’t see his son until two months after the birth). His natural linguistic intelligence was only bolstered by constant exposure to foreign music and movies. He picked up German along the way in his late teens but is truly bilingual in Arabic and English. Like many fluent speakers of another language, he feels that his personality shifts between the two depending on which he is using, even in his head: Arabic, he says, lends itself to a more figurative and metaphorical way of thinking, while when it’s precision he’s after, he turns to English – all without uttering a word.

Despite his gift for language, it was Biochemistry that Islam chose to study at university. He then spent two years in the Sinai Peninsula, working at a hospital in Sharm El-Sheikh, making lots of money, and spending it just as fast. Ultimately he began to ask himself where this was heading, and returned to Cairo, this time heading in the direction of customer services, including a six-month stint at a call centre, where he at least had the opportunity to express himself in English in emails and calls. But that also proved unsatisfactory over time, and it was when he began to reflect on what he really wanted to do that the language lightbulb went off in his head. So he said goodbye to biochemistry and launched himself into full-time medical interpreting five years ago at the age of 26. Picking up work immediately, he was plunged into a hectic world, again often manning the phones for his work, but able to work on autopilot. It came so naturally to him that he found himself interpreting in his dreams.

Within two years he’d amassed enough experience and confidence to take the leap into freelancing – in search of more varied clients and greater flexibility than employment as a company interpreter could offer. His address book was already full of names from his two years, and he was soon thriving. But then the pandemic struck, hitting the interpreting industry hard at first. However, Islam is often one step ahead of the game, and had ventured deep into the online interpreting rabbit-hole three months before COVID became part of everyone’s vocabulary, and so was well positioned for when online work became mandatory rather than an optional extra. He added simultaneous interpreting to his skillset, alongside consecutive, and soon offers came in for conference work. Feeling initially anxious about the prospect, and the higher stakes, he spent two whole months practicing daily, so that he could face the challenge without fear. As it turned out, the experience was better than expected. And now that COVID has slipped down the news agenda (not that it was ever taken that seriously in Egypt, where most people, he says, simply think of it as a kind of flu), then work has quickly returned to pre-pandemic levels.

In fact, business is booming, and Islam soon began to find that some of his clients’ needs extended well beyond interpreting, to recruitment and project management. He began to collaborate on these areas as part of his contract with one client and has since branched out into similar tasks working for the Army and the Department of Justice. It’s all about networking and connections, he says.

Aided no doubt by an entrepreneurial attitude, Islam collaborated in launching a company under the brand name Lingotec, Inc., He teamed up with a business partner and began to work his address book, further solidifying his client base. In the first month they had the website designed, then moved on to making the brand known, and within no time they’d attracted a buyer by the name of Multilingual Technologies, who purchased the company, and kept Islam on as Director of Interpreting. Given the windfall that produced, plus the greater support he can now call on, plus bigger budgets for tools and human resources, it’s been a stellar journey.

The secret of his success? Persistence is key, he says. And a can-do attitude. There’s nothing to lose – either you achieve what you set out to do over time, or you don’t and there are lessons to be learned. But if you’re good at what you do, know it, and don’t undersell yourself.

As a member of many groups on interpreting and translation, Islam particularly appreciates this community as a group of like-minded people who know how to talk and debate without descending into slanging matches. He relishes the difference perspectives and experiences, and the insightful comments that come in from all four corners of the globe, in response to so many questions – although he’d like to see more interpreting content too, as we’re weighted rather too heavily towards translation.

When all the work is done each day, and it’s time to relax, Islam turns to his two passions. The first is playing the piano and destressing through the magic of music, and the second will be familiar to many translators – pets. Although it must be said, he takes it to another level, with two dogs, two cats, two cockatoos, an aquarium with one Siamese fighting fish (beautiful but lethal if ever two males come face to face) and best of all – a peregrine falcon! Of course, the keeping of falcons is an ancient tradition in the Arab world, and this one lives at home. Perfectly tame, it even gets on with Islam’s cats. Falcons can soar off into the blue, hunt for prey, and always find their way back home.

Perhaps the ideal pet for a high-flying translator?