Face to Face with Lola Sugimoto

Ah, now you have an advantage over me, because you’ve seen the photograph. But when the online interview window opened to reveal Lola Sugimoto, my initial surprise was that she’s not Japanese at all, but rather Italian American (née Calabro), with bits of the original Dutch settlers in New York as well as a smattering of Irish and German genes thrown into the mix. All the same, she’s married to a Japanese, speaks the language fluently – although she speaks English to her son –and has been in the country over a decade, so we’re definitely talking bicultural here… 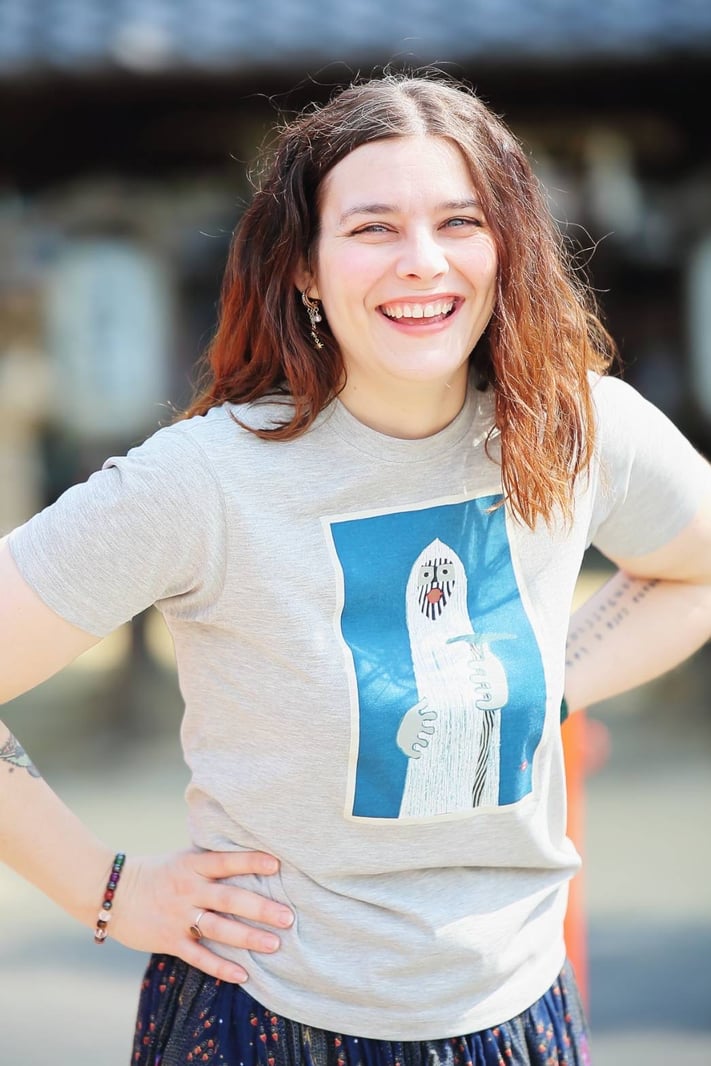 Growing up in Bloomingdale (New Jersey) was less of a multicultural experience than some might think, given that Lola’s neighbourhood was predominantly Italian and Irish – St Anthony’s church, where everyone met up on a Sunday, was a focal point for social gatherings. What’s more, she grew up speaking only English – her father’s unpleasant experience of being mocked at school for his own English made him resolve to avoid the same fate for his children. But the pull of the culture and the language heard at extended family gatherings was strong and it was Italian that Lola chose to study at university. While there, she translated an entire play from Italian into English, though with the benefit of wisdom and experience, she says she’d be reluctant to do so now.

Despite an early propensity for languages (Lola was once “Spanish student of the month”), her real passion was for English, and she set out on the path to academia, but dropped out just before writing her dissertation – her advisor had hinted at the difficulty of getting a job and making a comfortable living even in the next ten years, and so the attraction had begun to pale…

In the meantime, seven years of study had gone by, and Lola was approaching 30. A change of course beckoned. She began teaching English at a local language school, where it turned out that the majority of students were Japanese doing business in New York. A seed had been planted which would determine the rest of her life. The idea of travel also appealed, and given that she had contacts in the country by now, Japan seemed an obvious choice. But that decision was based more on the prospect of a steady job than any deep attraction to the culture at this stage. She had no knowledge of anime, for example.

Over the years of course she has developed a love of many aspects of Japanese culture, from temples and shrines to the traditional arts, along with the language, naturally. By now she's able to engage in discussions on all kinds of subjects with educated native speakers, although the modesty beloved of Japanese culture prevents her from blowing her own trumpet too much. That tension between outgoing Americans and more reserved Japanese has been one of the threads running throughout her life there, such as the day for example she spotted the man who would become her future husband in a bar, and took the very un-Japanese step of approaching him… She also makes interesting comparisons between the more overtly gregarious American notion of friendship, and the quieter but perhaps deeper Japanese equivalent. She hasn't been back to the States since before COVID either – which might exacerbate the occasional reverse culture shock she experiences – finding the US loud and in-your-face compared to what she’s become used to in suburban Kyoto.

The first job Lola took up on arrival was, naturally enough, teaching. But the attraction of working evenings and weekends soon faded, especially following the marriage and during pregnancy. Still, translation didn’t spring out as an obvious solution – she didn’t feel ready. However, when her husband spotted a small ad for a translator to work on texts for mushroom-based herbal supplements (of the non-magic variety, we hasten to add), she was tempted, but still hesitant. It was only when her husband himself proposed to take on the job that she was galvanized into action…

It turned out to be an enjoyable experience and led to a string of similar small texts which she could fit in around looking after her new-born son. By the time he was 3 years old and eligible for nursery school, Lola had built up a significant portfolio of clients and was working pretty much full time. Her texts focused primarily on PR but also dealt with art, traditional Japanese crafts and even cosmetics – a subject of personal fascination. Her clients are Japanese agencies based in the country, and she’s reached a point where her work diary is just as full as she wants it to be.

The secret? Well, beyond the obvious element of producing good work, Lola puts the emphasis on building solid relationships based on trust with PMs, working without ego and not taking umbrage at the slightest possible opportunity.

Lola is an active contributor to the ProZ online community, where she relishes the sense of connection, the ability to learn from others and offer advice that can range from the professional to the personal.

In her free time, Lola is yet another translator with an unusual hobby/passion. In this case it’s horror films – a fascination that began when her grandfather loved to sit with her and share his favourite movies. And now she has duly passed on that love to her own son, creating a connection between an Italian immigrant in industrial New Jersey and a young Japanese boy thousands of miles away.