The people behind ProZ.com: Enrique Manzo 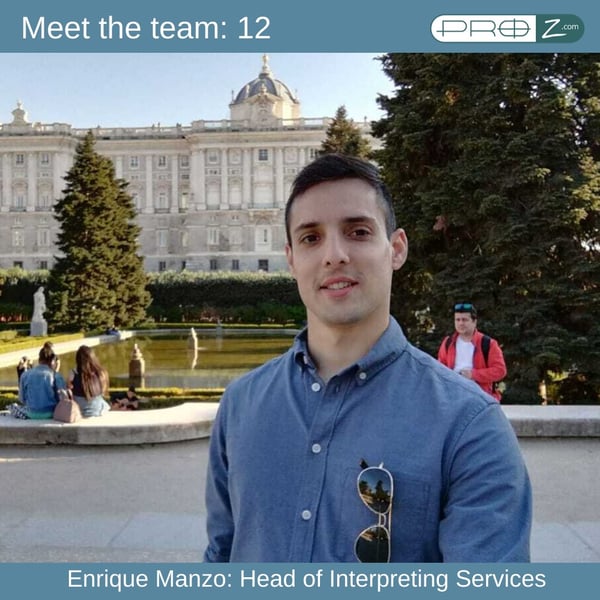 Over at the Translators and Interpreters (ProZ.com) Facebook Group, there are plans for a series of weekly posts introducing you to the people behind ProZ.com. Some of them you may have come across, while others have remained in the shadows… until now! In the weeks and months ahead, we’ll get to know all of them in turn. This is our 11th profile.

As translators, we all no doubt claim some familiarity with languages around the world, but how many of us can converse with ease about languages such as Wolof, Tigrinya, Assamese or Hmong?

This sort of arcane knowledge is bread and butter to Enrique Manzo, who spends every day communicating with interpreters from all four corners of the globe.
While studying for a degree in translation at the University of La Plata back in 2011, Enrique went to a ProZ.com presentation. Fired up, he intensified his KudoZ searches and began to check out the forums, soon turning ProZ into his point of reference for the entire industry. He wondered what it would be like be to work for them, and see translation from the inside. But given the difficulty of landing a job in Argentina back then, he stored the idea away and it faded from his mind.

After a few years of working as a freelance translator, building up clients from India, Argentina and the USA, he found himself working all hours – he readily admits to a tendency to overwork, and even now is studying for a degree in Foreign Affairs alongside his full-time job.
One day in 2017, feeling a bit under pressure, he turned to a local job website and noticed that the very first ad was recruiting for ProZ.com. After completing the interview and tasks in record time rather than the usual two weeks, he was hired and began working on support services then business services and Protemos. But in March 2019, Henry suddenly asked Enrique to take on a new challenge with the Boostlingo interpreter call centre, which now occupies all his time. Boostlingo is an online platform that fields on-demand requests from clients in real time, hooking them up automatically with interpreters from around the world. Once the call comes through, they drop everything, do the work, and are paid by the minute.
When Enrique took over, the Boostlingo team was struggling to cope with the demand channelled through their platform, and ProZ.com just couldn’t supply remote interpreters quickly enough in its backstopping role – especially in languages like Somali or Rohingya. Back then there were around 140 calls a month, with just 15 interpreters online at rush hour. These days there are 75 online and the number of monthly calls has risen to 4,000, involving at least 50 languages and varieties.
Enrique’s work consists of mobilising, motivating and communicating with all the interpreters in the system – about 150 people in all – making sure they’re online, and giving them instructions and guidance about peak hours, besides recruiting and onboarding new interpreters. It’s that contact, sometimes with professionals from minority languages in the most obscure places, that he enjoys most about the job.
As we speak, I see a few medals and trophies in the background. It turns out Enrique’s a strong competitive swimmer, and is also the local competitive shooting champion! But no need to worry: his sights are set exclusively on building the business…
Read previous versions of The people behind ProZ.com
Henry Dotterer
Jared Tabor
Lu Leszinsky
Mike Donlin
Yana Dovgopol
Florencia Vita
Patrick Dotterer
Karen Dizon Zaragoza
Alejandro Cavalitto