The people behind ProZ.com: Hayjor Roca 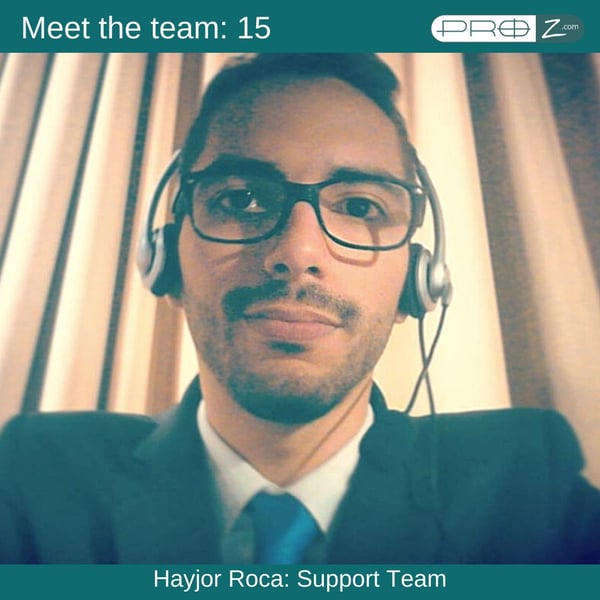 Over at the Translators and Interpreters (ProZ.com) Facebook Group, there are plans for a series of weekly posts introducing you to the people behind ProZ.com. Some of them you may have come across, while others have remained in the shadows… until now! In the weeks and months ahead, we’ll get to know all of them in turn. This is our 15th profile.

Hayjor Roca is not afraid of challenges. He once interpreted into Italian for Venezuelan President Nicolas Maduro at an oil and gas conference (hence the picture), then later worked at a congress of the Non-Aligned Movement which brought him face to face with Zimbabwe’s Robert Mugabe and North Korea’s Kim Jong-Nam.

By 2018, when he graduated in audiovisual translation (Italian, English and Spanish) from the prestigious Universidad Central de Venezuela, the national economy had taken a nosedive, despite the country’s enormous gold and oil reserves. Hayjor decided he had no option but to leave. And so he set off from Caracas across the continent in search of a better life, armed with nothing but a couple of suitcases and one of his many guitars.

Argentina has a long history of welcoming Venezuelans, so it’s no surprise that Hayjor ended up in La Plata. The country also had better business prospects than Chile, as well as a culture he felt attracted to.

For a few months, he went on working for his regular clients, including a couple of AVT agencies with local branches. But apart from that, he didn’t know a soul in those early days.

Finding a job with a fixed income was a priority, because Hayjor not only needed to finance his own life with his girlfriend, but to send over half his income back home to pay for his family’s rent, food, medicines and other needs.

It was a tip-off from a friend that led him to the ProZ.com ad, and to his sheer amazement, the ProZ office happened to be in the same building where he’d found an apartment that very week.

A quirk of fate? The universe playing tricks?

As a translation graduate, he was of course already aware of ProZ through KudoZ and the fora but that was the extent of his involvement. So when he was given an opportunity to see how the industry works behind the scenes, he seized it with both hands.

Hayjor now forms a key part of the support team, handling daily queries from users and members, while also working on building up an AVT project, creating dedicated tools and opportunities within ProZ.com for all those interested in audiovisual work, and answering questions specific to the sector.

Now over a year into the job, he enjoys the contact with translators from all over the world, especially the insights he gains into different cultural perspectives in relation to the same profession.

But Hayjor’s talents don’t stop there. He's also a classical guitarist, with several years of conservatory study behind him. What’s more, he’s currently training to be a pastry chef! Besides having a sweet tooth, he puts this choice of specialisation down to the fact that he was born on a national holiday, when every store was closed – obliging him to take an interest in preparing his own birthday cakes…

In fact, at first the question of further education was something of a dilemma: should he specialise in cookery or languages? We’re lucky at ProZ.com that Hayjor opted for the latter…