Traveling the world from my home office, the translation postcards of 2020 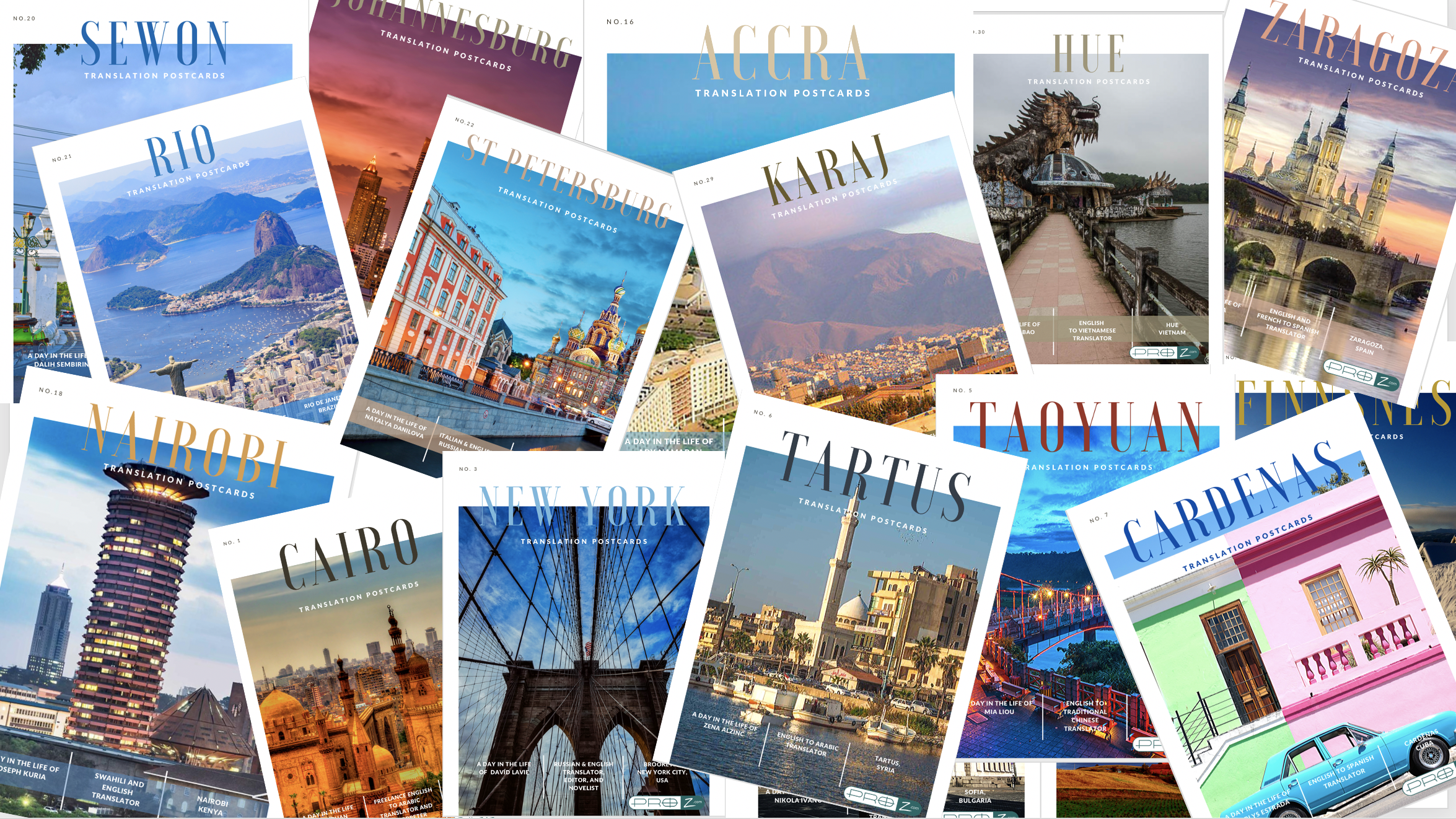 In March 2020, perhaps inspired by the fact that travel was fast becoming a thing of the past amid a global lockdown, I came up with the idea of a series of Translation Postcards for ProZ.com, featuring colleagues from all around the world — a chance to share an insight into their localities, lives, professional ups and downs, and even habits and diets.


But it was more than just vicarious wanderlust that got me thinking — also the fact that much of the dialogue in translator groups online was dominated by Europeans and Americans.

Fair enough, you might say, anyone is free to contribute, and if other members from other places choose not to, then that’s just the way it goes.

Ah, but it’s not as simple as that. First, a Western-centric domination creates a certain perspective of what is in fact a global profession — a perspective that discusses rates, practices, goals and opportunities solely in terms of how they are seen from, say, Spain or the Netherlands. Yet the world, and the economy, looks quite different when you’re sitting at your desk under a slowly turning fan or to the noisy sound of an air conditioner in India, Ghana or Brazil.

What’s more in groups dominated by certain geographical regions, it may not be that easy for translators from the Global South to speak out, even though there are rare and admirable exceptions who make themselves heard with clarity and enthusiasm.

So I set out to listen to the voices of those who are less often heard, from places that are less often highlighted: Egypt, Congo Republic, Taiwan, Indonesia, Mauritius, Syria, Ghana, South Africa, Poland, Mexico, Cameroon, Russia, Cuba, Bulgaria, India, Vietnam and many more. These are of course mixed in with great contributions from Europe, North America and, coming soon, Australia. It’s not about ignoring these countries, as they do form an important part of the membership of any group — simply of righting the balance, and creating a more nuanced, diverse picture.

[Editor's Note: Of the 31 postcards published in 2020, these received the most views at ProZ.com]


The process is simple: people write to me at andrewmorris@proz.com to express an interest in being featured. I then send them a questionnaire — always the same — encouraging them to fill in as much detail about their contexts and their professional lives as possible. We also set up an interview of up to an hour — usually on a Tuesday. And it’s a combination of their original notes and the themes that pop up in our free-ranging discussions that eventually gets woven into the article when I sit down to write it each Friday. I send it back to them for a final fact check and proofread by Saturday night, and then create the magazine format on Canva, based on one of their smart professional templates. It goes out every Monday in various professional groups for translators on Facebook and LinkedIn, and of course on my own pages and website.

For me as a translator it’s been a great learning experience — seeing that so much unites us all, from our aspirations to our working practices, despite the differences in local backdrop. And yet at the same time becoming far more aware that some of our colleagues are working in the context of war-torn nations, or in societies blighted by bureaucracy or corruption, while others have no national associations, and no recognised status to speak of in their country. Most of the translators in the South are at least able work with agencies from the North, and therefore have access, thanks to the Internet, to much better paid work than is available locally.

Best of all, each week I’m suddenly beamed into a home office/living room/bedroom in Cairo, Brazzaville, St Petersburg, New York City, Rio, Vegas or Jo’burg, involved in a friendly chat with someone I’ve never spoken to before, and the anecdotes and insights that emerge always give me plenty to look forward to when it comes to the writing.

It may be impossible to travel right now, but for me this more than makes up for it — a chance to travel the world from my own office, and meet some colourful characters, who together make up a fascinating and kaleidoscopic collection of ProZ.com translators around the world.