The people behind ProZ.com: Andrew Morris 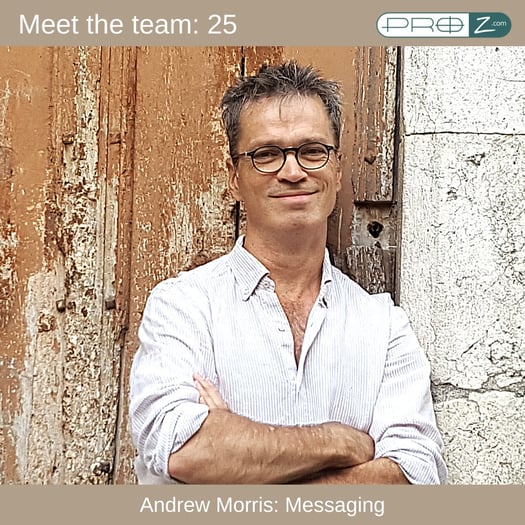 Over at the Translators and Interpreters (ProZ.com) Facebook Group, there are a series of weekly posts introducing you to the people behind ProZ.com. Some of them you may have come across, while others have remained in the shadows… until now! This is our 25th profile.
The last – and very much least – in the series. Hope you've enjoyed getting to know us all!

One day about four years ago, Andrew Morris was walking down the road when he was suddenly addressed by a frog: “*¡Hola Señor!*” He was less struck by the mere fact of a talking frog than by its excellent Spanish. Even more impressively, it turned out the frog had magic powers. “I can grant you any wish” it continued in English. “In the past, it would have been three wishes, but times are hard.”

Andrew thought a little and said: “After a twenty-year career in education and seven years of translating full time, I think I want to branch out a little and explore other skills. So for my wish I’d like a job where I can still keep my translation operation going, but can also write daily posts for translators, because that’s a fun thing to do. Also I’d want to be part of a dynamic team, as always working alone can have its downsides. Plus plenty of creative freedom so that I can write stories about team members and translators around the world. Perhaps a little bit of marketing thrown in? And because I used to be a teacher, I’d quite like to do a bit of group management too, because I enjoy the daily interaction, and facilitating exchanges of ideas.”

“Whoa, hang on a minute!” said the frog, “that’s quite a complex wish!”

“What kind of excuse for a magic frog are you?” replied Andrew, with a note of incredulity.

“OK, ok, give me a break already” retorted the frog. “I’ll make it happen, but you have to be patient.”

The frog hopped onto a lily pad and set to work. A few days later, Andrew received a message out of the blue from one Henry Dotterer, proposing a collaboration on what was then the Standing Out Mastermind. This was a paying group which Andrew had recently started, for translators with slightly more experience and a positive attitude to their work. Henry had been watching from afar, and reached out at the perfect moment, offering to support the group in return for access for all ProZ Plus members.

Andrew forgot all about the frog. And for two years, he continued running that group, alongside his regular translation work. Although the name changed along the way to “Translation Mastermind”, the idea of providing a safe and enjoyable learning community remained central.

But in December 2018, he had cause to thank his little green friend again when, in an end-of-year chat with Henry, the idea came up of joining ProZ.com full time and helping the organisation communicate better with its huge public. It was a challenge, starting with the Facebook group, but one that Andrew took on with relish. And now, a year and a half later, he realises that his role has become exactly what he wished for all along: fun, creative, and full of learning.